The Fellowship Hall of the First Unitarian Universalist Society in Marietta was alive with discordant, joyful noise on Monday as High Schools That Rock kicked off its 16th summer camp.

“This is the largest group for a guitar camp I’ve ever had in 16 years,” said instructor Mark Doebrich. “We had three sessions today and they were all full.” 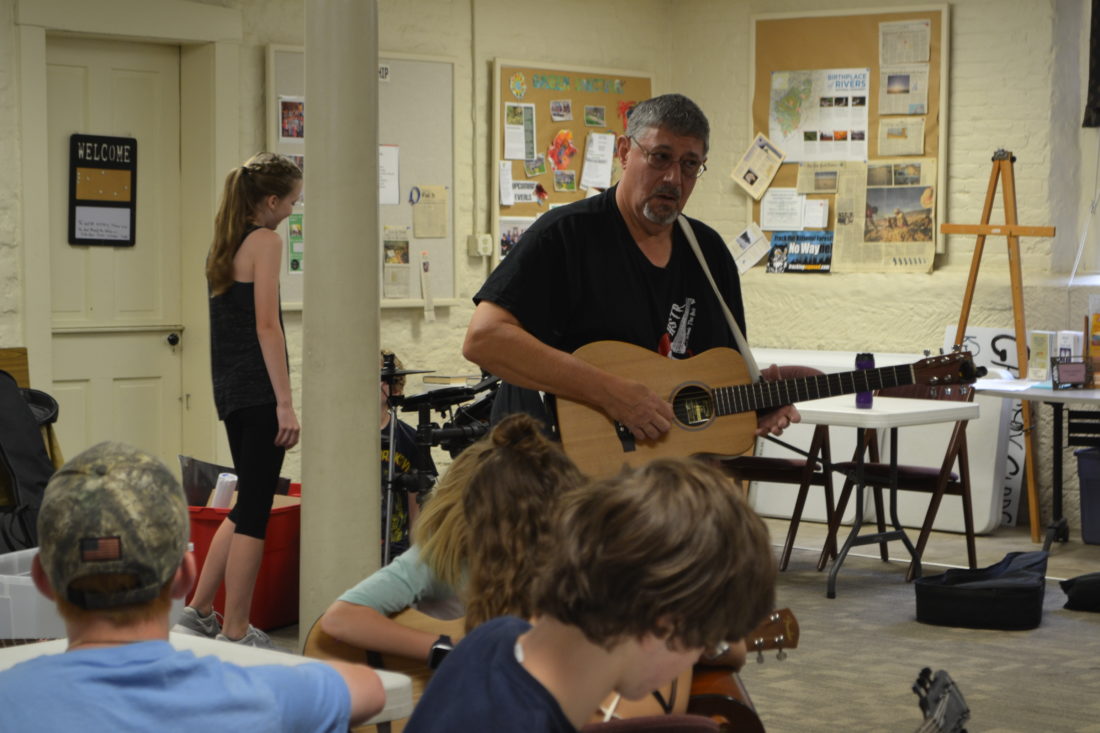 The early morning session was geared toward beginners and Doebrich kicked it off by teaching an easy acronym to remember the names of the strings (EADGBE): Eddie Ate Dynamite Good Bye Eddie.

“The acronym was provided by one of my students many years ago and it works better than a lot of other acronyms,” he said.

Nondyce Gulick, 14, who will be a freshman at Marietta High School in the coming school year, made her way around the room of 20 or so fledgling guitarists to offer help.

“I think the hardest part for them to learn is remembering finger placements,” said Gulick, who has been part of the group for the past three years and serves as one of the primary vocalists. “I’m just going around helping to make sure they have their fingers on the chords.”

The novice group, many of whom strapped on acoustic and electric guitars that were bigger than they were, learned the D and A chords and by the end of the hour, before the advanced players came in, the musicians were learning to play Tom Petty’s ‘Free Fallin.’”

“I think my favorite part has been learning a song I know, that I’ve heard on the radio,” said Mattigan Ward, 9, a student at Harmar Elementary. “My mom thought I could learn to play the guitar and it would help me with my singing.”

While it was mostly fun, the worst part for the new guitarists, as most guitarists will attest to, was getting used to pressing down the strings, strumming and developing calloused fingers in the process.

“Everybody raise your hands and shake it out,” Doebrich instructed several times during the session.

High Schools That Rock practices during the summer on Tuesday evenings at the church and will have several performances during the summer, with more to be added. Once school starts again, the students can decide to continue throughout the school year.

“Parents can contact me through my email, gradearocknroll@gmail.com, or call me on my cell phone at 740-336-4183 to sign up,” Doebrich said.

Ali Doerflinger brought her daughter Sophie Paschal, 10, after she learned about the camp through social media. High Schools That Rock is also on Facebook.

“This is the first year for her and she wanted to do it because she took a guitar unit with Mr. (Michael) Tobar at Washington School,” Doerflinger said. “I think she’s excited; she really wanted to learn.”

Other instrumentalists and singers were also part of the camp. The week will wrap up with a performance from 5 to 7 p.m. on Friday during the free community meal that is held the second Friday of each month at the church.