As much as we love a good story about that Eureka! moment, the big inventions don’t really come out of thin air.

Karl Benz is known for inventing the first gasoline–powered car, but there were already wheels and buggies and combustion engines around. Thomas Edison invented the phonograph, but he was standing on the shoulders of those who had already recorded and reproduced sound.

Who deserves credit for inventing the electric guitar? The answer is complicated.

Like Benz’s car and Edison’s phonograph, the electric guitar was not an invention but the result of an evolution. And of course, the instrument continued to evolve even after its template was set in the middle of the 20th century.

The electrics we play every day ultimately emerged thanks to the advent of electrified sound, the changing demands of musicians, and marketplace competition. And there were a lot of small innovations along the way to bring us the electric guitar as we currently know it.

Way back in 1890, a US Navy officer named George Breed was granted a patent for his “of and apparatus for producing musical sounds by electricity.” The apparatus was built onto a guitar and transferred vibrations from strings to an electrical current.

Breed’s invention produced sounds that have been described as, “Exceptionally unusual and unguitarlike.” It did not amplify the sound as much as create frequencies for the device to sound at, but Breed deserves a nod for being among the first to combine a stringed instrument with electricity.

Over a five–year period beginning in 1919, a quality control supervisor at Gibson named Lloyd Loar was experimenting with pickups and amplification. In 1923, he even built a prototype of an electrified harp guitar. By 1924, Loar had even designed an electric bass and performed a concert on an electric viola he had built.

But Gibson was focused on banjos and mandolins at the time, and the brand scoffed at the idea of electrifying acoustic instruments. Frustrated by Gibson’s refusal to progress — and tired of fighting it — Loar and two associates resigned.

In 1933, Loar and others formed the Vivi–Tone company to market new concepts for putting electricity together with acoustics. This resulted in early electrified acoustics, but the company gave up guitars and moved on to keyboards before too long.

The tenor banjo dominated the fretted–instrument market in the late 1920s, making it an obvious choice for early implementation of pickup technology. As George Gruhn and Walter Carter explain in Electric Guitars and Basses: A Photographic History, the Vega company was one of the first to do so, unveiling an electric banjo in 1928.

As the Music Trades article reads, “The electro–magnetic pickup is built within the instrument and is attached to its sounding board. The unit is connected with the amplifier, which produces the tone and volume required of the instrument.”

Guitar sales were on the rise at the time, so Stromberg–Voisinet ran an ad in 1929 featuring two banjos and two electrified guitars with its pickup and an amplifier.

With that said, it’s not crystal clear whether Stromberg–Voisinet ever put electrified instruments into production or if there was just a good ad campaign. No evidence exists that the guitars were actually produced.

If Stromberg–Voisinet did indeed manufacture the guitars, it was certainly not the company to innovate the technology implemented. Patents had already been granted incorporating similar pickup technology.

Swiss immigrant Adolph Rickenbacker (née Rickenbacher) was a tool–and–die maker who set up shop in Los Angeles in 1925. The National String Instrument Corporation was one of his customers, eventually engaging Adolph to make metal bodies for its resonator guitars.

At the time, there was drama afoot at National. Founding partner George Beauchamp (pronounced BEE–chum) had clashed with the company over its refusal to develop electric guitars — similar to Lloyd Loar’s troubles back at Gibson — despite the fact that he had been making serious progress on the technology.

Beauchamp played Hawaiian guitar and understood the problem that steel guitarists like him had to face when playing with a band: no one could ever hear them. It was the same volume issue he had tried to solve earlier when he co–invented the metal–bodied resonator with John Dopyera at National.

Toying with pickup designs, Beauchamp arrived at a over–the–strings pickup with two horseshoe–shaped magnets surrounding a coil of wire. That wire surrounded six smaller magnets — one for each string. This was a giant leap toward the modern pickup as we know it today.

Earlier pickups were microphonic, meaning they depended on string vibrations being transferred through the air or a wooden bridge. Beauchamp’s design instead transferred vibrations electromagnetically, with metal strings disturbing a magnetic field to produce electric signals.

The design sacrificed natural acoustic tone — a major sticking point for manufacturers like National, Gibson, and Dobro — but solved the need for greater volume. Acceptance among musicians and listeners would prove to be slow but sure.

Beauchamp, Rickenbacker, and others severed ties with National and joined forces in 1931 to form the Ro–Pat–In Corporation. While no one is left to explain the weird name, Ro–Pat–In is solidified in gear history for producing the first electric guitars to utilize a modern pickup.

Beauchamp’s pickup design was built into the cast aluminum body of a Hawaiian guitar, just as he had drawn it on his patent application in 1932 (revised for submission two years later as Patent US2089171 A). Working with fellow ex–National employees Paul Barth and Harry Watson, Beauchamp built a prototype of an electric steel guitar.

The guitar’s small, circular body earned it a nickname: the “Frying Pan.” 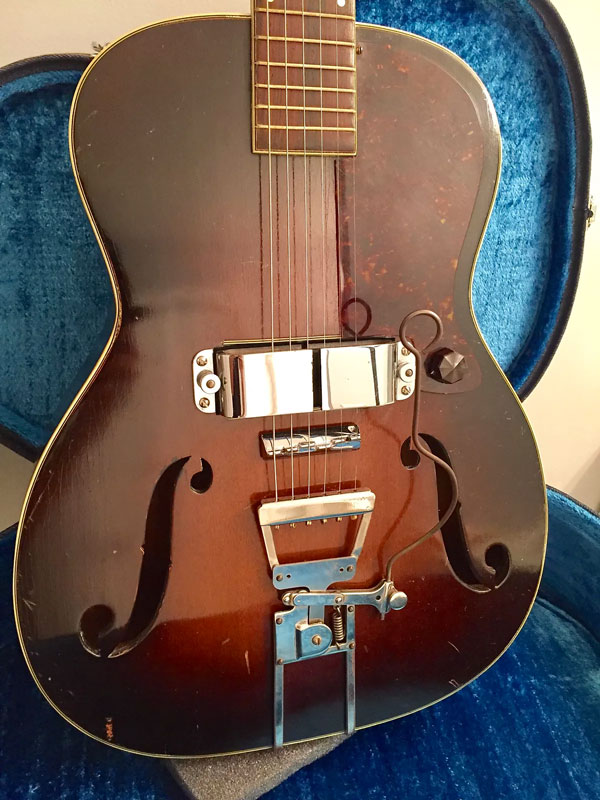 Coming out of production in 1932, the Frying Pan was available in two models with different scale lengths: the A22 and A25. Ro–Pat–In sold a grand total of 13 guitar–and–amp sets in the launch year of 1932.

Ro–Pat–In sold the first models under the brand name Electro. They changed the company name to Electro String Instrumental Corporation in 1934 and marketed the guitars as Rickenbacher Electro Instruments, and so (after a subtle spell change) the storied Rickenbacker brand was born.

In 1935, Electro String followed up the A22 and A25 with the Model B, which came in a square–neck lap steel version and a round–neck Spanish version.

Also in 1935, Beauchamp and Rickenbacker introduced a guitar dubbed the Ken Roberts model, which placed a horseshoe pickup and the first–ever tremolo arm (designed by Doc Kauffman) on an archtop body built by Harmony with a full 25–inch scale.

With less than 50 built, the Ken Roberts guitar was, in many ways, the first modern electric Spanish–style guitar ever produced.

Gibson was finally getting the hint about electrics circa 1934, around the same time it was building large archtops and dreadnought flat tops to compete with Martin and Epiphone. In 1935, Gibson released the E–150, a metal–bodied lap steel designed to compete with the Frying Pan.

In 1936, Gibson more gamely introduced its first electric hollowbody guitar. It was the EH–150 custom, with $150 being the combined cost of the guitar and a companion Lyon & Healey amplifier. 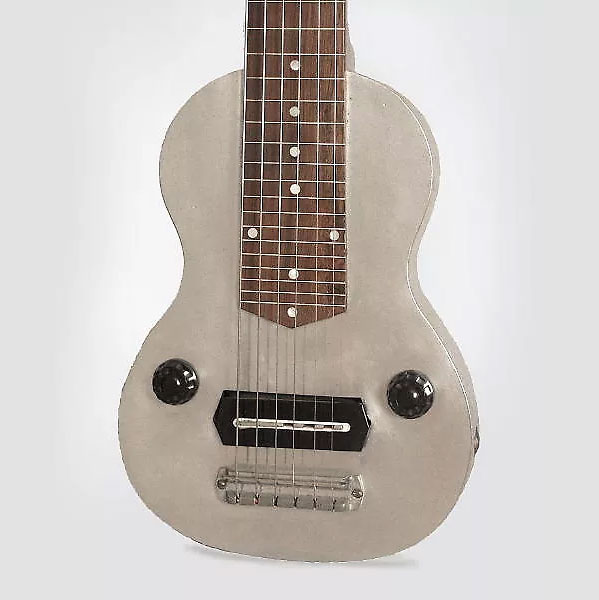 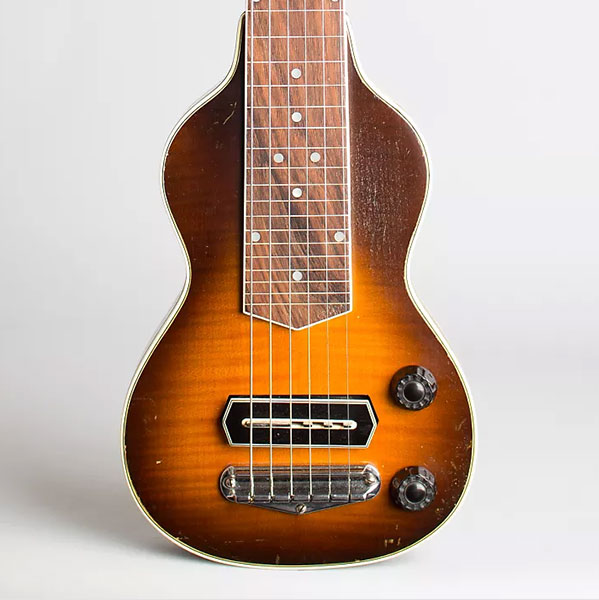 That same year, Gibson introduced its first ES or “Electric Spanish” model: the ES–150, a hollowbody with f–holes, a bar pickup later known as the “Charlie Christian” type, and two controls.

Through general manager Gary Hart, Gibson had by then applied for a patent on an under–the–strings pickup so as not to compete with Adolf Rickenbacker’s over–the–string patent. 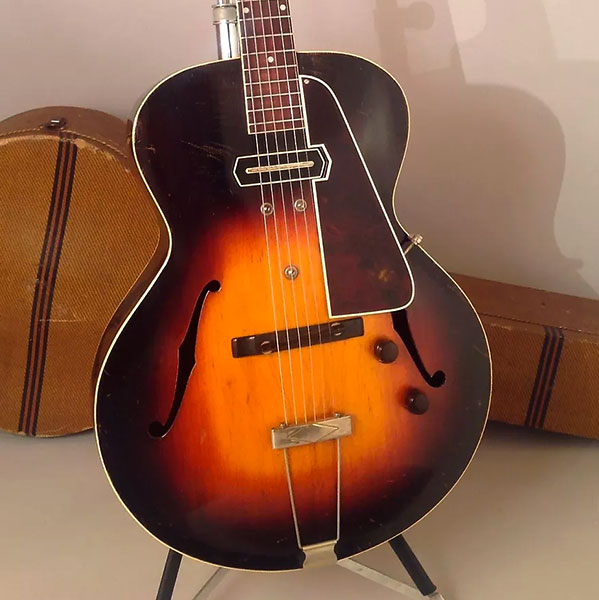 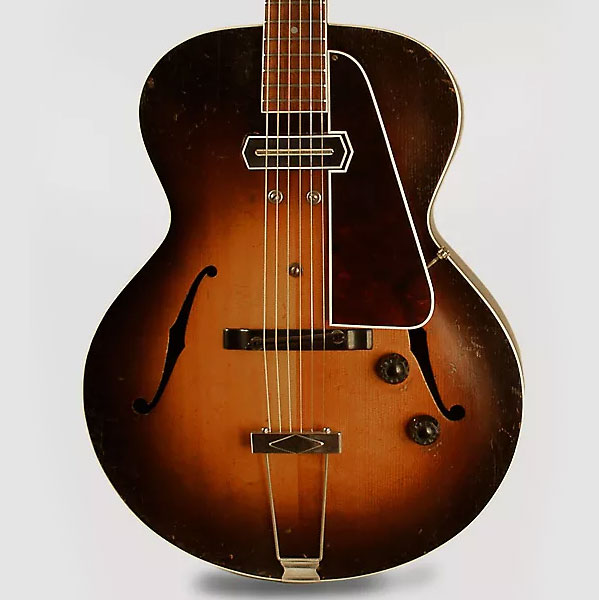 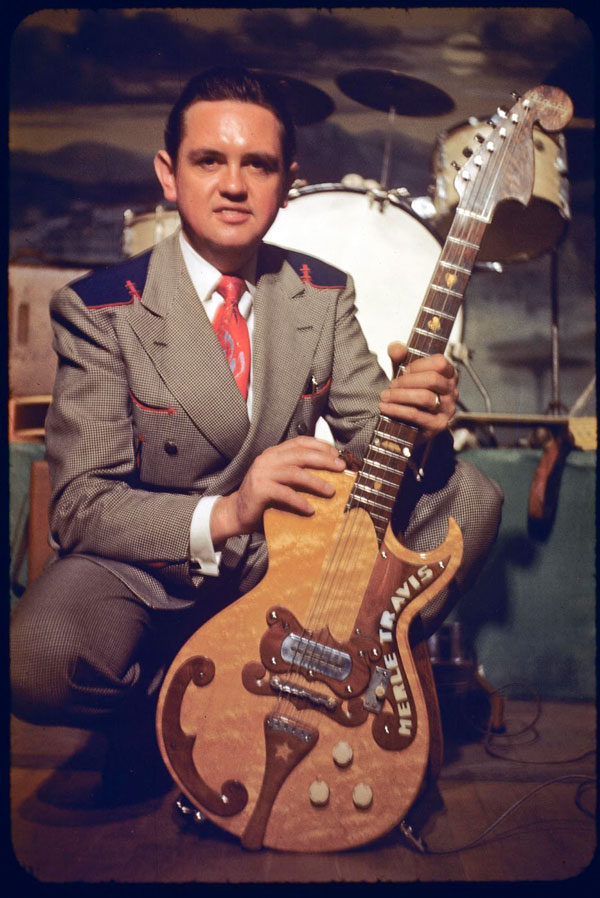 In 1947, musician Merle Travis commissioned Paul A. Bigsby to build a solidbody electric guitar. Collaborating on the design, they created a gorgeous instrument with a birdseye maple body, neck–through construction, and tasteful wood inlays and ornamentations.

The Bigsby–Travis guitar presaged later electric designs with its sleek body, a single cutaway (like Gibson’s Les Paul, which came five years later), and a headstock with all six tuners on one side. Bigsby’s original components included a fixed bridge made of cast aluminum and a handmade single–blade pickup.

As vintage experts Gruhn and Carter note in their book, Bigsby would probably be known today as the father of the electric solidbody had he gone into production with this guitar, but he made only a handful.

Instead, Bigsby is considered the father of the modern pedal steel, and his name has adorned tailpiece vibrato units since the 1950s.

By the time Leo Fender was first fleshing out solidbody electric designs around 1943 or ‘44, the first wave of electrified stringed instruments had already come. But progress in design and manufacturing had slowed down with the onslaught of WWII.

But Leo’s vision was not to simply build an electric guitar, but mass produce an electric guitar. Whereas prior developments left manufacturers all but apologetic for not reproducing authentic acoustic tone, Fender embraced the new sound and sought a clean, amplified version of a string resonating on a solidbody.

After forming the K&F company in the mid 1940s (with Doc Kauffman, who previously had a hand designing Rickenbacher Electros), Leo founded the Fender Electric Instrument Company in 1946.

Fender was joined by George Fullerton in 1948, and the pair bucked tradition with simple, reliable, and reproducible solidbody electrics made from slabs of ash. The single–pickup Esquire was released in 1950 with the double–pickup version, the Broadcaster, following later that year. These became the world’s first commercially successful solidbody electric guitars.

The Broadcaster was renamed the Telecaster shortly after its launch and is still in production nearly seven decades later.

As a 12–year–old kid around 1927, budding guitarist and relentless tinkerer Les Paul had an idea. He stuck the pickup from a record player inside his acoustic guitar, placed a telephone’s mouthpiece under the strings, and wired them both to his parents’ radio to function as an amp/speaker combo.

Then, stuffing rags into his acoustic to control the pickup’s microphonics, he started thinking about a solidbody model. 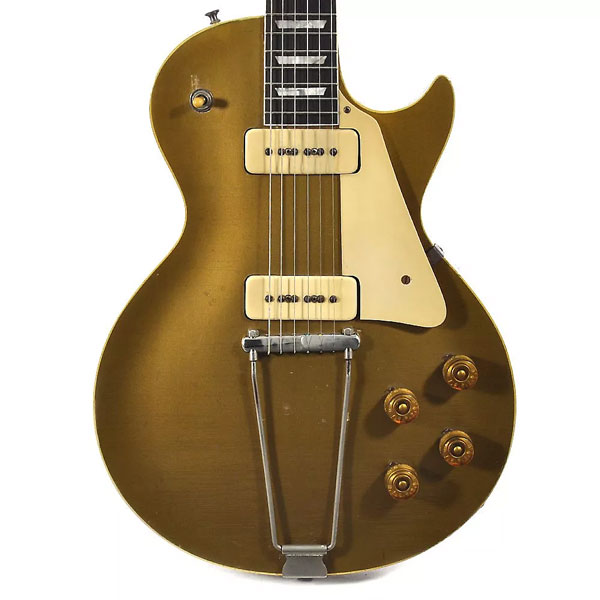 Around 1939, Les started work on a solid electric prototype — a real Frankenstein object — later to be known semi–affectionately as “The Log.”

A solid block of pine formed the narrow center section of the Log’s body. The pickups were screwed into a bridge and had covers made from old clock parts. It had a tailpiece and a crude vibrato.

Les Paul joined the big block of pine to a neck he had pulled off of a Gibson L–series model and used the sides from an Epiphone to add the “wings,” a cosmetic choice to create the waisted shape of a guitar.

Paul took his Log to Gibson in 1941, and they laughed him off. But Gibson came back to him in the early 1950s when it decided it needed some competition for Fender’s new Broadcaster and Precision bass. In 1951, Gibson signed a deal to tag Les Paul’s name on their elegant new solidbodies. The Gibson Les Paul “Goldtop” was released in 1952.