It only hurts to be number two in a concert market if you’re the sort of music lover who thinks only (audience) size matters, according to YYCScene editor and publisher Mike Bell.

The longtime bard of the city’s music scene says Calgarians looking for some music need to quit whining about the acts that are bypassing Calgary these days in favour of  Edmonton.

Recent acts include Lady Gaga, Bruno Mars, Ed Sheeran, Guns N’ Roses and Beck — all of whom have recently bypassed Calgary in favour of performing gigs in Edmonton.

Bruno Mars performs a tribute to Prince at the 59th annual Grammy Awards on Sunday, Feb. 12, 2017, in Los Angeles. Mars also performed in Edmonton, but not in Calgary. (Matt Sayles/Invision/Associated Press)

By and large, Bell told the Calgary Eyeopener that the problem is that Calgary’s larger concert venues can’t compete with Edmonton’s at the moment — particularly when it comes to hockey arenas.

Calgary’s Saddledome, built in 1983, falls short when competing with Edmonton’s nearly $500-million Rogers Centre, which just opened in 2016. They seat about the same amount, but saddle-shaped roof with a large jumbotron can lead to problems hanging items, like heavy speakers.

“The big reason is the big old Saddledome,” he said. “It’s an old building and the roof is not good and some of the bigger shows can’t fit in there with all the equipment they have.

“We’re missing out (on shows) because they have a big, shiny new building in Edmonton and they’ve put a lot into trying to get acts in there — and that’s a big part of it.”

Commonwealth stadium draws from across province

With stadium shows, such as a recent Guns ‘n Roses concert, McMahon Stadium can’t possibly compete with Commonwealth Stadium. It holds in excess of 50,000 people, which allows the band to compress its Alberta footprint into a single destination. 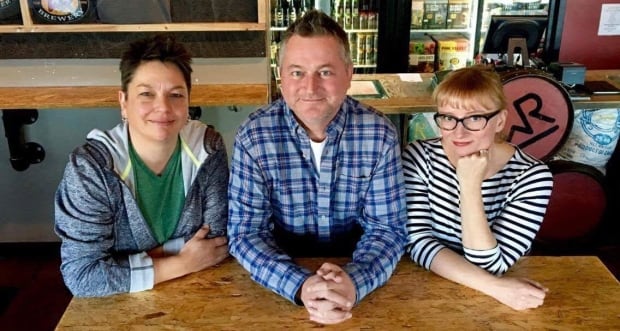 YYScene founders Janet Matiisen, Mike Bell and Kari Watson. Editor Bell, the longtime bard of Calgary’s music scene, says there is plenty of excellent music to be found if you know where to look for it in Calgary. (Submitted)

While a portion of Calgary concertgoers are nursing bruised egos over being supplanted by Edmonton as Alberta’s go-to concert hub (give or take seven Garth Brooks concerts that he’s currently performing at the Saddledome), Bell maintains that Calgary’s music scene is actually quite strong if you know where — and when — to look for it.

“We do a pretty good job with Sled Island,” he says.

“They come in, they get out, they take the money out,” he said. “[Why not] support the festivals that are here — support the people trying to make a difference here. There is culture here to be found, you just have to look for it.”

He also expressed optimism that sooner or later, the tide would turn back in Calgary’s favour, with regards to arena rockers.

“When [Calgary Flames President] Ken [King] gets his new building [arena], I’m sure we’ll do well.”

With files from the Calgary Eyeopener