For centuries, the acoustic guitar was played as a solo instrument. Then, in the 1920s, it started to find its way to the bandstand, thanks in part to the influence of guitar virtuosos like groundbreaking jazz guitarist Eddie Lang.

But there was a problem with putting the guitar in a band. It just wasn’t loud enough to compete with drums and horns. It was more often seen and felt than it actually was heard.

That meant that once the guitar became accepted in ensembles, a quest for volume came soon after.

In those early days, guitarists addressed the need for loudness in various ways, with varying degrees of success. Some musicians experimented with available technology — like telephone mouthpieces — to amplify their instruments.

Other early attempts at amplification didn’t even involve electricity. During this time, metal–bodied resonator guitars were being built by George Beauchamp and John Dopyera in Los Angeles. And while those resonators are known today as blues or bluegrass instruments, the first examples were designed with the general need for volume in mind.

But it was ultimately the pickup — a device that converts the strings’ vibrations into electrical impulses that can be fed to an amplifier — that became the ultimate answer to the loudness problem.

Nearly a century later, major companies and boutique makers continue to tweak the pickup’s design to coax increasingly more authentic amplified tones from the acoustic guitar. This is the story of how the pickup evolved from a basic way to make a guitar louder into a sophisticated sound–shaping tool.

One of the earliest innovations in pickup creation came from Lloyd Loar, the legendary engineer and designer best known for designing Gibson’s L–5 archtop. In the early 1930s, Loar split from Gibson to launch his own company, ViviTone.

There, he designed ViviTone’s early pickups for acoustic guitars, which are fascinating devices when viewed through a modern lens. These electronics were mounted in a removable drawer that slid out of the bass rim of the guitar. The signal was transferred from a wooden bridge to a metal plate.

In the mid–1930s, inventor Harry DeArmond created the first commercially available magnetic pickups. In this type of pickup, a magnet is wrapped in copper and its charge is disrupted by string vibrations. This produces an alternating electric signal that is then amplified.

DeArmond’s FH/FHC (for archtops) and RH/RHC (for flattops) were actually marketed as specialized microphones. They could be fitted onto a guitar without otherwise modifying the instrument, and their position could be adjusted for optimal tone — a sound that became synonymous with jazz guitar. 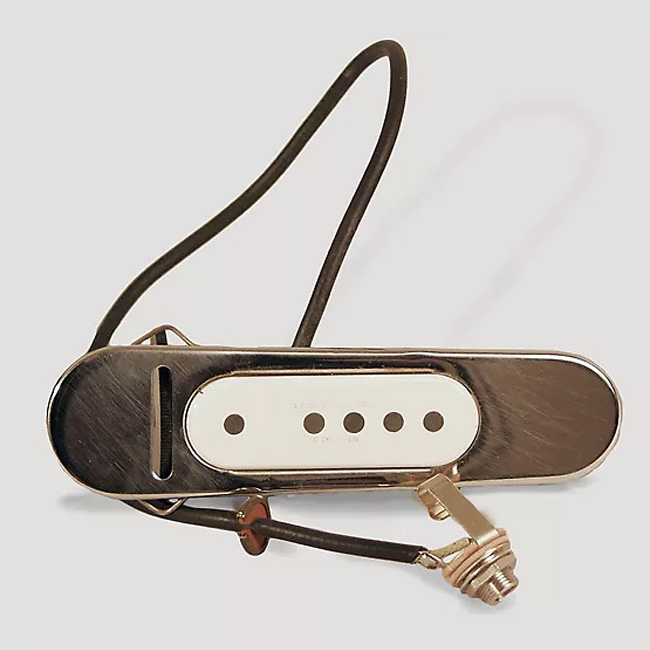 It’s worth noting that DeArmond invented what is generally considered the first ever guitar effect, a tremolo called the Model 800.

The first example of a pickup on a commercially produced guitar was the aluminum–bodied Rickenbacker Electro A–22. This odd-looking instrument has been popularly dubbed the Frying Pan on account of its long neck and circular body. It hit the market in 1931.

Gibson, despite losing Loar, designed its own pickup. In 1936, the company put one in what is generally considered an early electric guitar but is for all intents and purposes an electrified acoustic archtop: the ES–150. That guitar is hexagonal pickup mounted near the neck, for a warm tone.

The ES–150 was soon made famous by Charlie Christian, who used it to create horn–like lines that defined the role of the guitar soloist in jazz. Hence, this hexagonal pickup is affectionately known as the Charlie Christian pickup. 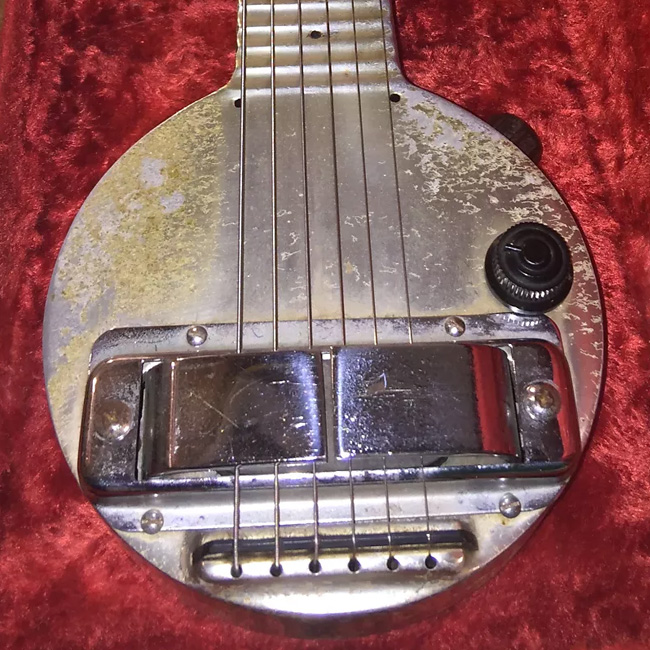 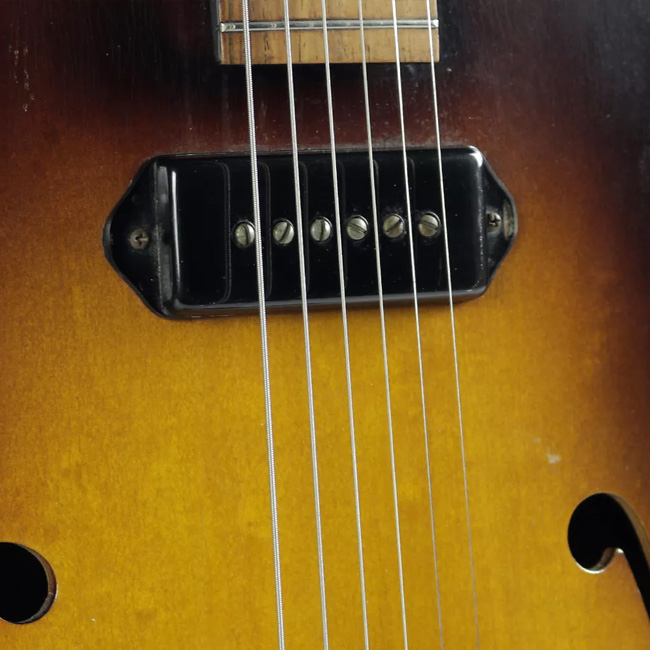 Hexagonal pickup on a Gibson ES-150

The Charlie Christian pickup is a magnetic design that would ultimately influence Seth Lover’s famous PAF humbucker. It’s made of a black plastic bobbin wrapped with copper wire, with a single pole piece in the center to pick up the string’s vibrations. A pair of 5–inch magnets are attached to the pole piece inside of the guitar and are secured to the soundboard by three bolts. 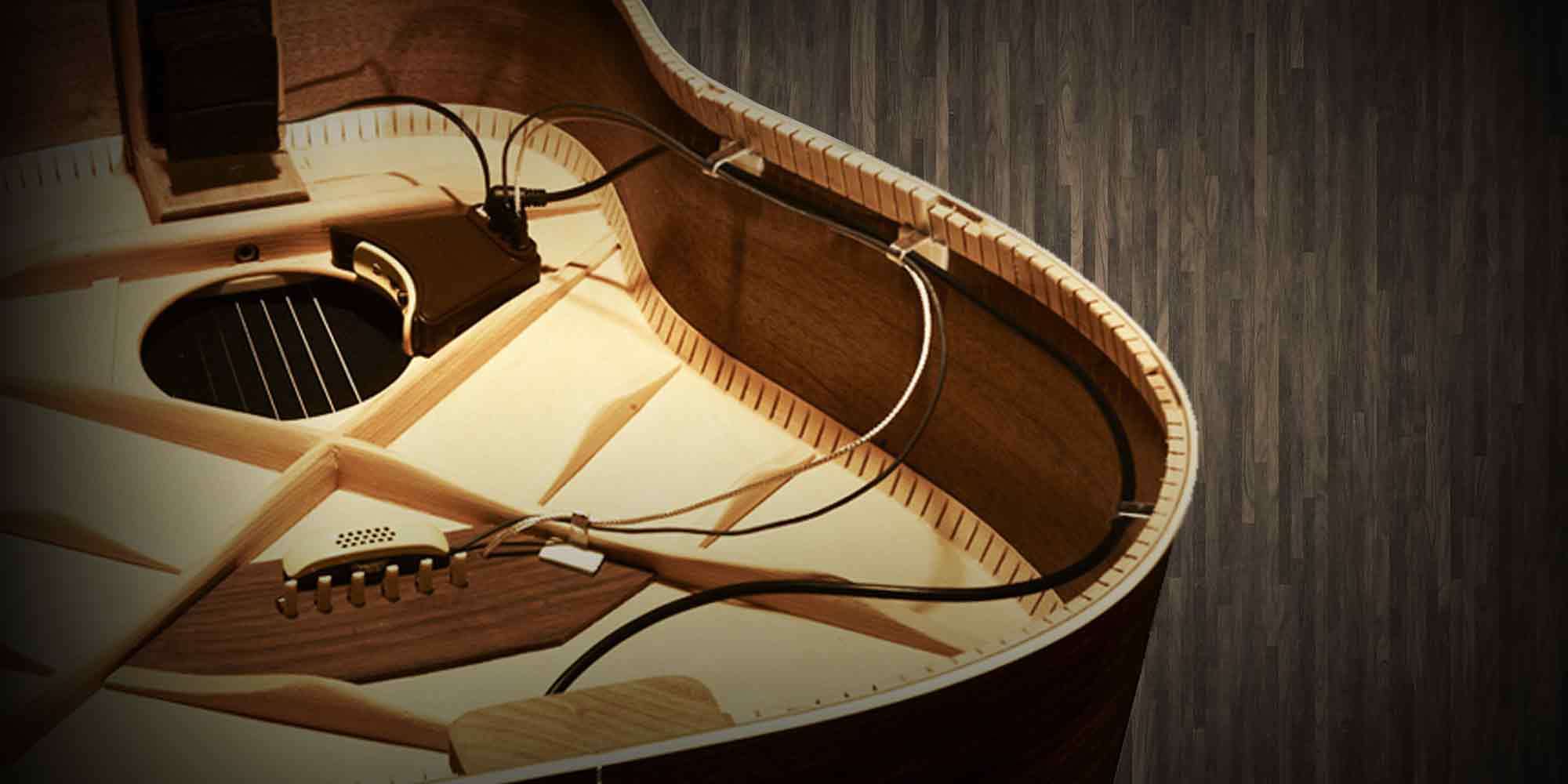 The Acoustic–Electric Guitar Is Born

In the 1950s, Gibson entered the solidbody electric guitar market in a big way with the Les Paul, and it couldn’t help itself from putting some pickups on acoustic flattops as well.

Take the J–160E, made famous by the Beatles during their television appearances in the ‘60s. For this guitar, Gibson mounted a pickup just beneath the fingerboard of a round–shouldered dreadnought. Tone and volume controls are mounted on the top, just like on an electric guitar.

The pickup on the J–160E is Gibson’s P-90, originally introduced in the mid–1940s as a replacement for the original Charlie Christian pickup. This was standard equipment on electric guitars like the earliest Les Paul and the ES (Electric Spanish) series instruments. 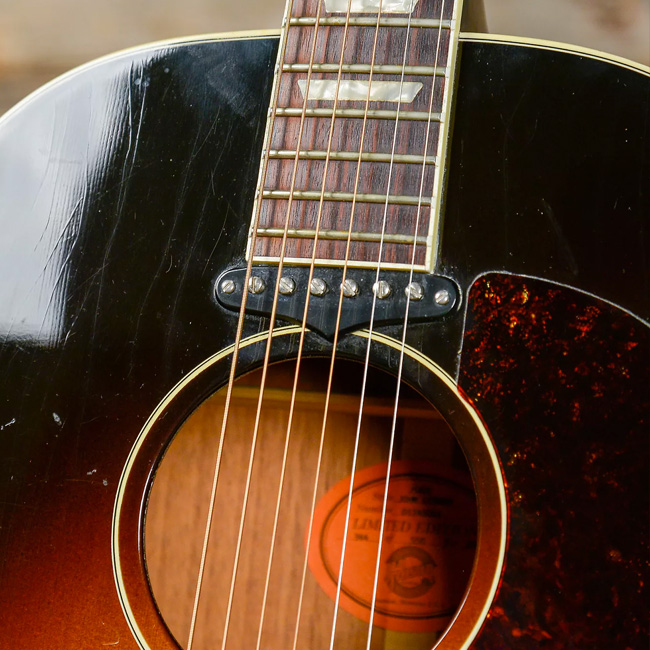 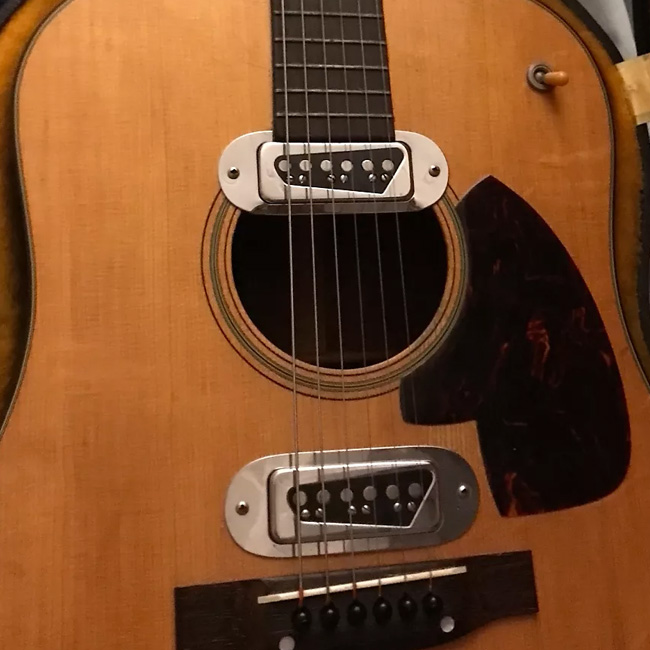 Plugged in, the J-160E might not have a particularly authentic acoustic sound, but its simple proof in concept set the stage for today’s more sophisticated acoustic–electric guitars.

Martin followed suit in the late 1950s with guitars like the D–18E and the D–28E, but these electrified versions of Martin’s classic dreadnoughts were flops.

Those featured two DeArmond pickups, three control knobs, and a toggle switch on the soundboard. The pickups made these guitars look odd and in fact, negatively affected their tone. Still, some players have been drawn to them — most notably, the late Kurt Cobain of Nirvana.

When the country star Glen Campbell asked Ovation for an electric model in the early 1970s, the company put a piezo pickup on one of its trademark guitars with a fiberglass bowl bodies. That piezo sat in the guitar’s saddle, using crystals to produce electric signals when hit with the guitar’s vibrations.

Ovation also positioned the pickup’s volume control on the side of guitar instead of its top, which allowed the soundboard to not only vibrate more freely but look cleaner. With his new guitar, Campbell was free to solo onstage at loud volumes.

Ovation made strides with its innovative acoustic–electric guitar, but Takamine wasn’t far behind with its own innovations. In the late ’70s, the Japanese company got busy designing pickups that would work well for more traditional acoustic guitars. 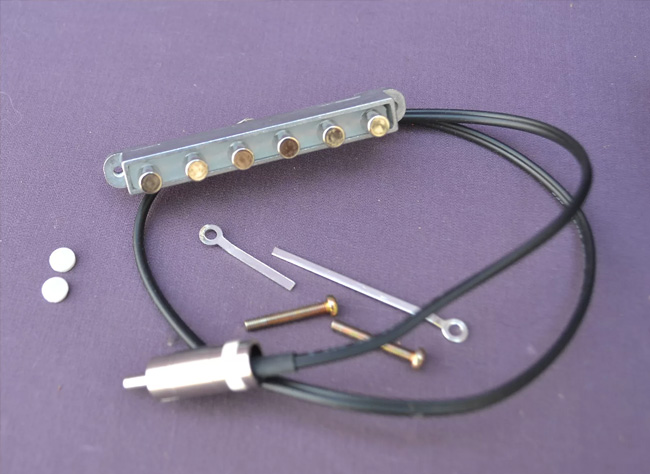 Takamine’s R&D resulted in the Palathetic pickup, in which six individual piezo transducers are embedded under the bridge plate, maximizing clarity between strings. Today, this is the most common acoustic pickup design.

At the time, palathetic pickups were only available on Takamine guitars like the PT-007S, and not as aftermarket items. With those guitars, Takamine ushered in a new era of plug–and–play performance. And at a time when pickup options were slim, some guitarists went as far as buying Takamine guitars with the express purpose of gutting them for their electronics.

In the 1980s, Takamine would push their electronic designs further, creating both passive and active acoustic guitar pickups.

Takamine pioneered the active acoustic pickup featuring an onboard preamp and sliding EQ controls. The electronics were mounted conveniently on a guitar’s bass bout with an external battery compartment. This is still very much the dominant design of active acoustic pickups today across all manufacturers.

All of Takamine’s pickups were under–the–saddle designs, but this format has its detractors. Some think these pickups sound artificial, as they don’t capture the vibrations from the soundboard — the guitar’s all–important source of tone. 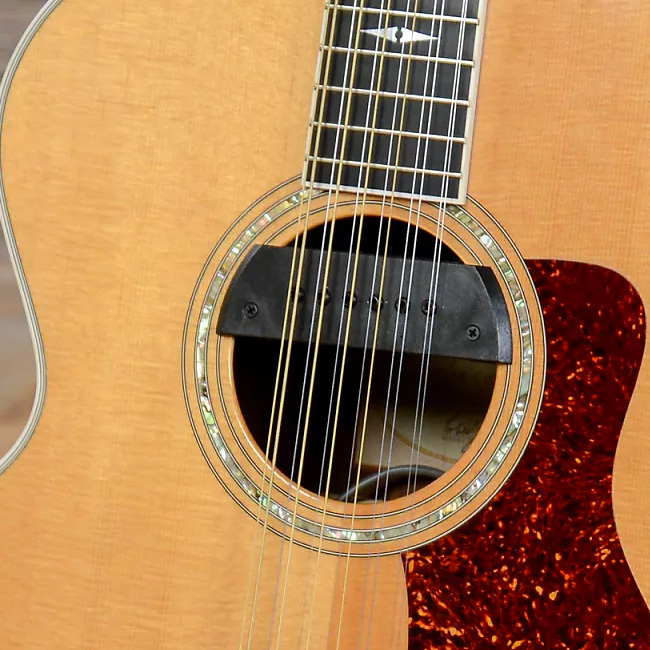 This problem was addressed by the original Barcus–Berry pickup in the mid–1970s. That pickup featured a soundboard transducer easily affixed to and removed from a guitar’s top. Similarly, the FRAP pickup (a device most famously used by Neil Young) had a sensor that captured the vibration of a soundboard in all dimensions.

In other directions, the early 1980s saw the introduction of the Sunrise pickup, a magnetic humbucking soundhole model, which, when used with a good preamp, was known to produce a rich, multi–dimensional sound.

Near the end of that decade, the luthier Ken Donnell pioneered a flexible soundhole mini microphone, based on the belief shared by many guitarists that the best sound comes not from a pickup but a mic. 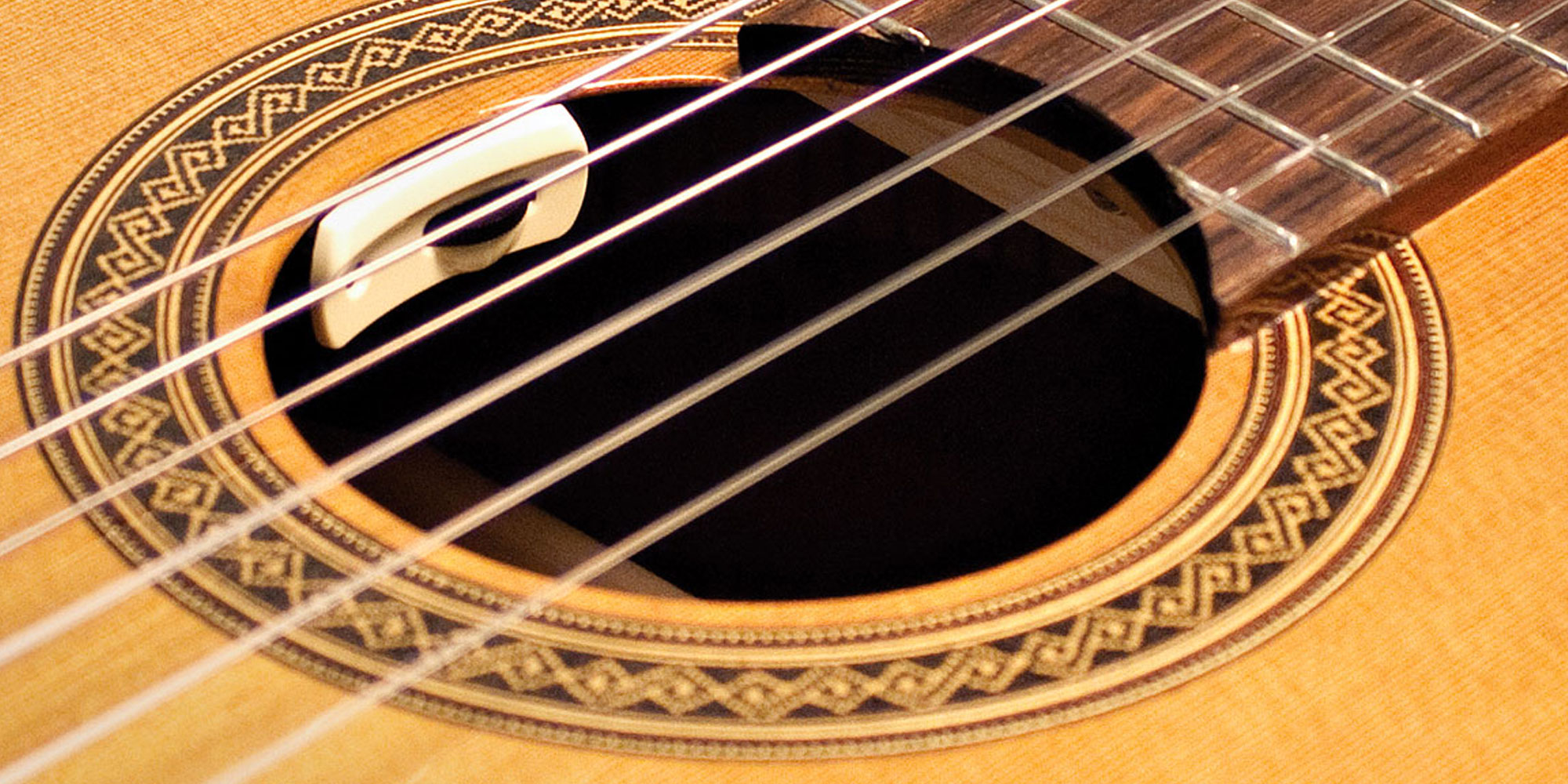 Just as now might be a new golden age of lutherie, it’s also an exciting time for acoustic electronics, with an unprecedented range of options. As companies like LR Baggs, Fishman, B–Band, K&K Sound, Dean Markley, DiMarzio, and others continue to refine their designs, the latest technology trickles down to even entry–level acoustic–electric guitars.

In its proprietary electronics systems, the Australian guitar maker Cole Clark uses a three–way solution that, as the company recently told us, is “tuned and specifically chosen to capture the true and natural tones of the guitar.”

This includes six individual piezo sensors under the bridge to broadcast low–end, a brace–mounted Face Sensor (the company’s term for a soundboard transducer) for midrange, and a condenser microphone to capture the high end.

As the company explains, this helps reduce mid–range quack and pingy highs. The microphone is also tuned to capture sound from 2.5K up to 20khz “well outside the typical feedback frequencies of an acoustic guitar.”

Other products bring modeling technology into the equation. The Fishman F1 Aura Plus, for instance, works in conjunction with onboard digital electronics to evoke a range of prewar Martin guitars recorded professionally in a studio with a microphone. This pickup is exclusive to the Martin 00-15E Retro.

Yet while companies push the envelope for amplifying acoustics, the earlier designs are all but outmoded.

Takamine’s Palathetic, for example, has been nearly unchanged since its introduction. DeArmond’s vintage pickups command a premium on the vintage market and the original designs have been reissued, bringing things full circle to the early days of acoustic guitar amplification.