A pair of New Jersey star-crossed lovers are split apart by the girlfriend’s ambition to be a scientist in New York City, and her boyfriend’s unwillingness to leave home. An impending apocalypse puts their relationship to even greater tests. If all that is not intriguing enough, try a pivotal role for astrophysicist Neil DeGrasse Tyson in the new rock musical “The Eleventh Hour,” currently playing in Tribeca at Town Stages, a new theater, gallery and multi-event space that was formerly White Street restaurant.

The show draws liberally from the outer limits of sci-fi and fantasy while grounding the action in suburban New Jersey and the streets of New York with charming and hilarious results.

To be clear, NDT, as he is affectionately known in “The Eleventh Hour,” is not a cast member. But he is superbly portrayed by Olivia London. The young actor amply fills his signature solar system waistcoat and lives up to the scientist’s legendary status. NDT has offered the girlfriend, Amy Leonardo, an internship at the Museum of Natural History. As played by Miranda Luze, she is an idealistic and feisty young woman. Her decision to move to the city from New Brunswick, leaving her wannabe-BonJovi/Bruce Springsteen musician boyfriend behind, is the catalyst for the madcap events that ensue. The boyfriend, Nevin Denham, embodied by Henry Fisher, can’t overcome his love for his hometown in favor of his girl. The basement rock music scene is the center of his universe. 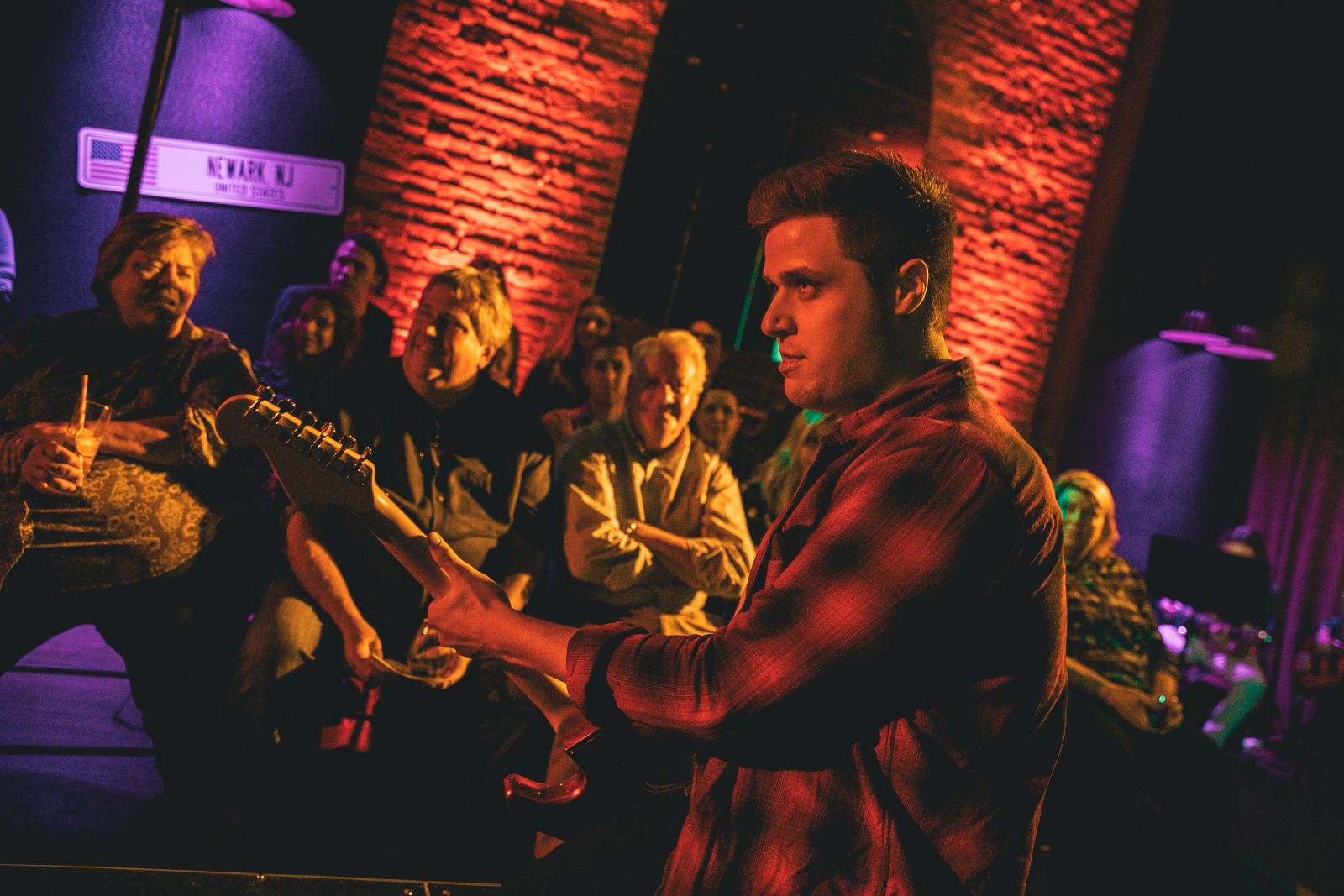 Which brings us to the music! Each night there is pre-show of changing bands—on a recent night the Bryan Hansen band warmed up the audience. David Seamon wrote the show’s songs and they are foot-tapping enough. But it’s Seamon’s lyrics that make the show. Witty and silly by turn, there are show-stopping songs for NDT, a pair of moles, Nevin’s basement cronies and a even a black hole. Amy arrives in the hectic, sleepless city to a pounding anthem. While some lyrics were lost underneath the loud music, others stood out.

Inevitably, Amy and Nevin must save the day with NDT giving them instructions by video link. The device works well in the space where actors perform on a narrow catwalk between the audience on each side. Various characters appear by video, including two hapless local TV hosts played by Christopher Pasi and Joshua D. Sympson. Pasi also plays perhaps the standout character of the show—a performer from the perennial New Jersey dinner theater attraction, “Medieval Times.” Sir Facetious tries to save the day with old-fashioned gallantry and a cod-English accent. Brianne Wylie rounds out the cast, adapting seamlessly to numerous other roles.

As the young lovers are reunited through their quest to save the world, the show promotes a message of tolerance and kindness. The new world they will create will only be open to people with “good hearts,” a message that the young cast embody well in this good-hearted show.

“The Eleventh Hour” is playing  through December 1 at Town Stages, 221 West Broadway