As the Queen: It’s a Kinda Magic tribute show begins its New Zealand tour, two Fairfax writers debate the crucial musical question: were Queen the best rock band ever or the worst?

READ MORE:
* The queen of tribute bands promises to rock you
* Far-away asteroid named after Freddie Mercury on his 70th birthday

It is July 13, 1985.  Freddie Mercury strides onto stage, he is kicking up his feet, he waves, he smiles, he jigs – a ball of charisma and energy in a white vest and tight stone-washed jeans.

Freddie sits at the piano and kicks straight into an abbreviated version of Bohemian Rhapsody. 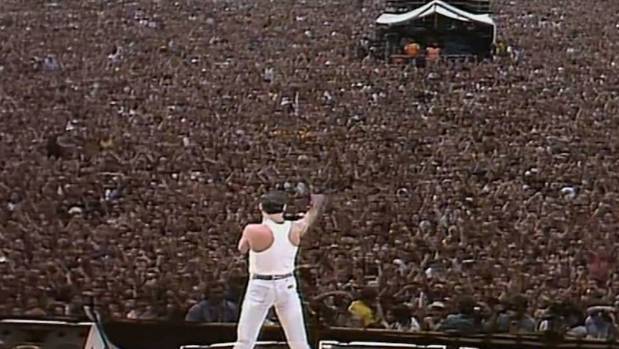 We Will Rock You: Freddie Mercury on stage at Wembley Stadium for Live Aid in 1985.

This is Queen’s legendary Live Aid concert. Wembley Stadium is filled with 72,000 people and millions are watching on television. And Freddie owns every single one of them.

What follows over the next 20 minutes is a perfect distillation of everything that made Queen one of the most ridiculous and entertaining bands in the world. It is exhibit A in the defence of Queen.

It is also a creative crescendo for the band, a high water mark that could not be matched by anything that followed.

After just two minutes of Bohemian Rhapsody, Freddie leaps up from the piano, take his trademark mic stick and prowls to the centre of the stage. He stands with his legs apart, his right fist raised and the mic stick held with a flourish. Then he launches into Radio Ga Ga. 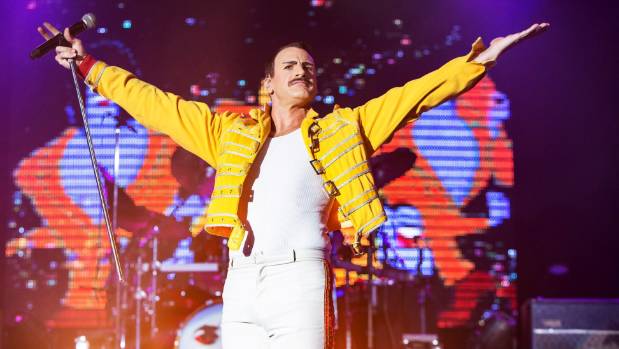 Queen’s theatrics and stadium-sized choruses make them perfect fodder for tribute acts and Stars in Their Eyes-style impersonators.

He is like an opera singer crossed with a circus ringleader – a sexy and ridiculous totem for the band. That moustache. Those teeth. That sheen of cheeky sweat.

He plays the mic stick like a guitar, gleams that toothy smile and dances with the camera man.

You can’t take your eyes off him.

Then there’s the singing. That voice is the centre of Queen. It is playful, massive and unapologetic. He never misses a note, fluffs a line or runs out of breath. He makes this kind of showmanship and virtuosity look easy – joyful even.

And next to him is Brian May with the massive hair. He provides three more flamboyant ingredients – that big chunky rock guitar, operatic harmonies and brisk twiddly diddly solos that rival Freddie for showmanship and virtuosity.

And behind them both, as anonymous and efficient as bank managers, Roger Taylor and John Deacon provide a solid and tight rhythm section on which this flamboyance can rest.

This is not pompous rock where we must puzzle over album sleeves for clues to Tolkien references in the lyrics.

This is music that as a child I would put on the turntable and jump up and down so much the needle would hop out of the groove. Its infectious energy makes you want to run on the spot.

This joyful energy animated films like Flash Gordon, Wayne’s World and Shaun of the Dead, making them better and funnier with their presence.

Their music works in those films because we know Queen are inherently ridiculous, but love them anyway.

And we love them because they sacrifice everything to the ultimate aim of being incredibly entertaining.

The music is always elaborate, but never pompous. They are not interested in studiously elevating albums to the status of high art. Instead, they crank out dozens of big hit singles full of love and life. This is why their greatest hits albums are so amazing. Every glove compartment should have one.

The key to Queen is their sense of camp. This is perhaps why they are huge in Britain, where I grew up and where camp is is a national past time, but not quite so popular in New Zealand, where camp is not such a central part of the culture.

Queen: they were the worst of bands (Philip Matthews)

I don’t really have any objection to rock music being fun. Of course, rock music is supposed be serious, provocative, original, authentic, dangerous, obnoxious and sometimes offensive, but it can also be fun. Some of T Rex was fun. Prince was fun. The Sex Pistols’ singles were fun. But when the Beatles were fun, they were at their worst (Octopus’ Garden etc). And Queen, who never aspired to be anything but fun, were always at their worst.

Maybe you have to be British to get it. Queen are as British as music hall, as British as a variety show or a Christmas panto, as British as a box set of Are You Being Served? It is about camp and play-acting and the endless comedy of men dressing up as women for a laugh. When Queen’s songs were turned into a jukebox musical called We Will Rock You, it was Ben Elton they contracted to write it. Of course it was: Ben Elton is a comedian and Benny Hill was sadly unavailable.

Queen were pastiche artists who arrived at the tail end of glam rock. Even their two big signature songs, We Will Rock You and Bohemian Rhapsody, were highly derivative. We Will Rock You borrowed heavily from Rock and Roll by Gary Glitter (now there were some fun songs). Bohemian Rhapsody was fake rock opera, as though all of The Who’s Tommy was crammed into six overwrought minutes.

Pomp rock was never more pompous than this. Scaramouche, scaramouche, and so on. While Queen’s theatrics and stadium-sized choruses make them perfect fodder for pub tribute acts and Stars in Their Eyes-style impersonators (again, so British), it is a fact that no good music was ever influenced by Queen. Guns N’ Roses were great until Axl Rose was allowed to let his Queen influence in. Queen ruined them.

They were a singles band, not an album band. Has anyone ever listened to all of The Game or Jazz (great title, shame there’s no jazz on it)? And it was in a review of Jazz in Rolling Stone magazine that critic Dave Marsh raised another Queen problem. Were they, as he put it, “the first truly fascist rock band”? Remember, they had no time for losers. The fascist implications of Queen’s stadium rock were taken to hilarious extremes when avant-gardists Laibach translated One Vision into German, so it could resemble a Nazi anthem.

Admittedly, this also means Queen had a very persuasive dictator up front. Freddie Mercury was a gifted showman, no question. But he died. And this is the truly terrible thing about Queen: they had no idea when to stop.

Frizzy-haired astronomer Brian May has kept Queen on life support for more than 20 years with a string of guest vocalists, from Paul Rodgers of Bad Company to the latest pseudo-Mercury, American Idol runner-up Adam Lambert, who really can sing. In the process May has turned Queen into their own tribute band. Let it go, Brian.