SIKESTON, Mo. — Lynn Akins has created any number of crosses. He has built small crosses and tall crosses. There are crosses made of wood and others of metal. Some are smooth; others have rough surfaces.

Yet, of all the crosses he has created, only one is officially patented by the U.S. government.

Akins has designed and patented a guitar shaped like a cross.

According to Akins, if he is not building a cross, he is thinking about a cross design.

“For some reason, the thought just came to me, ‘How cool it would be if I could build one and turn it into a guitar?'” he said. “Then it would serve two things — to promote salvation, and by adding the guitar part to it, you attract more people to it because of the music that can be created. You have two things there working together.” 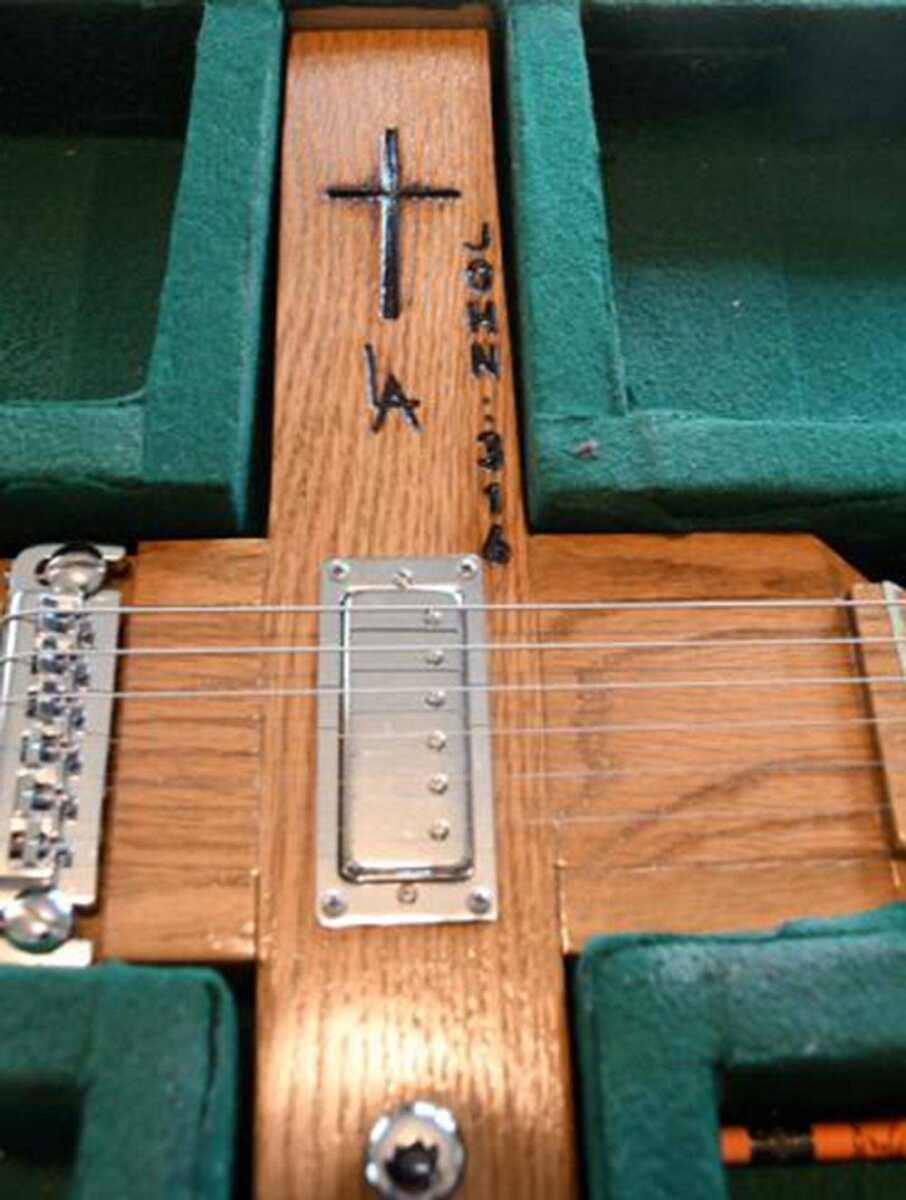 Lynn Akins has received a patent for a cross guitar. His design includes the inscription, “John 3:16.”

Akins said the design of his cross guitar is basically similar to the many crosses he makes. It is built from oak, because he likes the grain of the wood and its durability.

Once the woodwork was completed, he turned the piece over to Michael Williamson of Jackson. Williamson put the hardware in place, completing the guitar.

While Akins doesn’t play guitar (he jokes he can’t even play the radio), he has had others give the instrument a try.

“I’ve had a least a dozen different people play it. I haven’t had anybody say that they didn’t like it; everybody that plays it seems to like it,” he said.

Akins explained he sought a patent to retain control of his idea. He acknowledged guitars often are created from other items and different shapes. 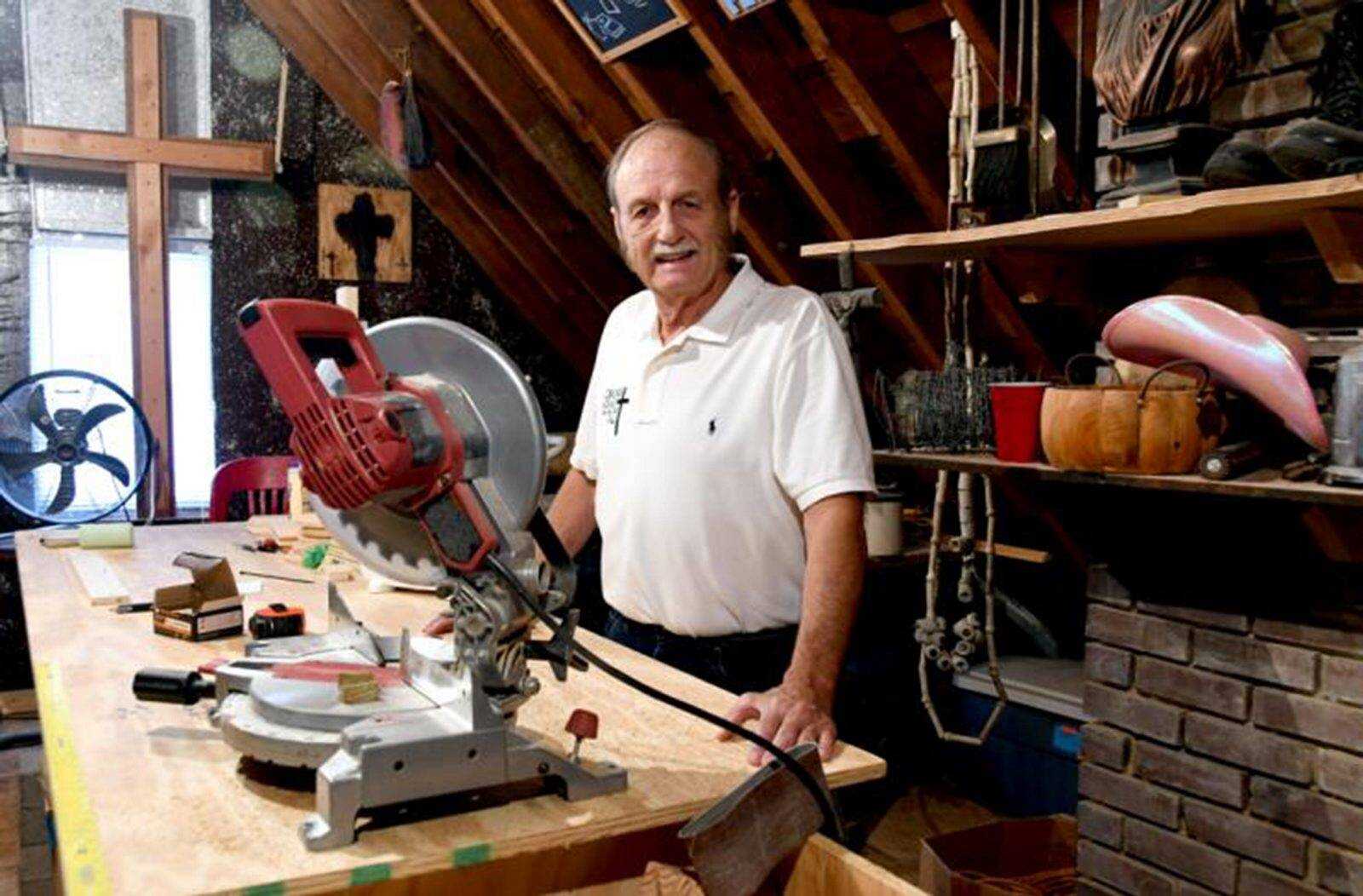 Lynn Akins stands in his workshop he has created in the attic of his Sikeston home, where he creates his many crosses. Akins recently received a U.S. patent on a cross guitar he designed.

“I didn’t think I would ever have the chance to get this patented because it is just such a common thing, but I did,” he said.

The patenting process took about a year and half. Now Akins is working to promote his creation.

He plans to have his cross guitar appraised to determine its value. Depending on its worth, he said he might consider selling the rights to someone who could play it and promote it.

“It depends,” Akins added. “I would like to continue my career of making crosses, but it takes revenue.”

Akins’ career as a builder spans much of his lifetime. He said as far back as he can remember, he has liked to design and build things.

Today, many of his efforts center around the crosses, which he called a rewarding hobby.

Most of the crosses he makes, he gives away. He estimated over the years, he has given 500 to 600 — many to people he knows and others to those who have come across his Facebook page and asked for one.

“It is a good feeling when I give a cross to somebody because I feel like I am helping them, or I hope I am,” he said.

While he is working on his second guitar cross, Akins also is designing what he calls a rainbow cross.

It will be created from tubing that will spray water, creating a rainbow effect when the sun shines through the watery streams.

“I like being creative, and it doesn’t matter what it is — ice or wood or metal or whatever,” he said.

“That is why I make my crosses out of the ordinary. When someone walks by my crosses … hopefully, they will stop and think about the whole story about the cross,” Akins said. “One day when people look at a cross — especially a guitar cross — I want them to think of me as a cross builder.”