When you ask Bernie Kampf what got him through the Vietnam War, his answer might surprise you: a simple Gibson acoustic guitar. For Kampf and many soldiers who passed through his bunker during his time overseas, music provided a much needed escape from the day’s troubles, even if only for a brief moment.

For Kampf, his experience made the decision to get involved with nonprofit Guitars for Vets an easy one. The organization provides a free guitar and lessons to Veterans struggling with physical injuries, post–traumatic stress disorder (or PTSD), and other emotional stress.

According to Kampf — who serves as National Director of Chapter Operations, Chicago Chapter Coordinator, and an instructor — picking up a guitar allows vets to ease their racing minds.

“PTSD is kind of like having ADHD, while also being on caffeine and speed,” Kampf told me. “You’re constantly thinking. You feel both anxious and panicked. When you focus on the music you’re playing, it tends to quiet things down and remove the noise.

“If you enjoy the music, it can be as good for your wellbeing as, say, meditation.”

This month, Guitars for Vets celebrates 10 years of helping veterans cope through the healing power of music.

Both to help celebrate that milestone and in observance of National PTSD Awareness Day today, Reverb ran a “Tuners for Good” promotion during which 100 percent of tuner proceeds went directly to Guitars for Vets. Thanks to the generosity of the Reverb community, we reached our goal of $10,000 raised in just 48 hours.

To get an insider’s perspective on the organization and its work, we sat down with Bernie Kampf to learn more about the seven years he has spent with the nonprofit.

You’ve been playing the guitar for quite some time. Tell me about how you got started.

I started playing the guitar in 1958 so that’s… Wow, almost 60 years. I’ll let you guess how old that makes me.

My mother’s family is musical. There was always someone playing the guitar, playing the piano, or singing around the house, so I decided that I wanted to learn how to play the guitar. When I was 12, I took lessons for about six months before going off on my own and teaching myself.

Then at the age of 20, I went into the service.

And your playing didn’t stop when you went overseas, right? Tell me about your time in Vietnam and the role music played. 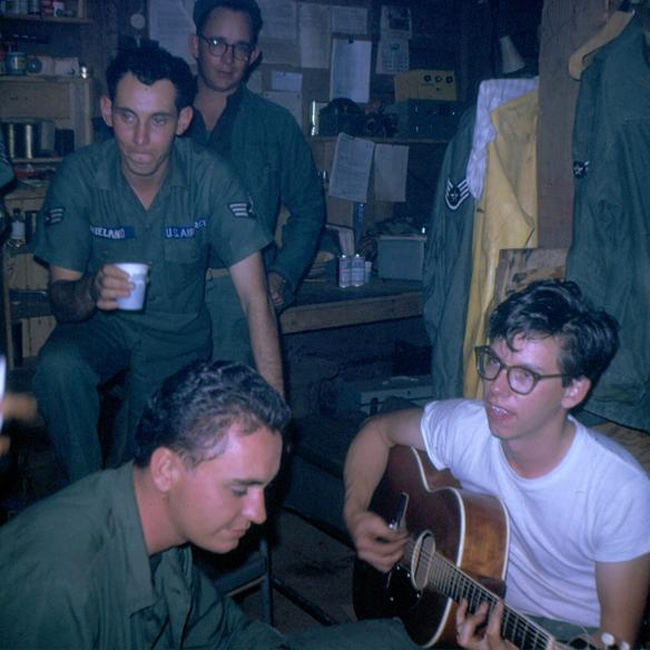 While I was overseas, I lived in a bunker. My team was small — no more than five people — but at any given time, there’d be 20 to 30 other folks passing through.

There was AC and there were no officers, so our bunker served as a meeting place.

I don’t want to say it was like Animal House, but it really was where people came to drink, play cards, and just decompress. I would compare it to a saloon in the Wild West, where you come in, hang up your gun, and grab a drink while the piano was playing. Except it wasn’t a piano, it was a guitar.

The guitar was a huge part of what helped me — and everyone who passed through — escape from the day’s problems and relax. Everyone would gather around and we’d sing Johnny Cash or Christmas songs if it was around the holidays.

When the guitar was out and everyone was gathered around and singing, you could just escape from your troubles for a while.

So it sounds like the guitar helped you through the war in the same way that guitars today are helping veterans enrolled in Guitars for Vets.

Absolutely. It wasn’t a hard sell to get me involved in the program because I’ve seen and experienced firsthand what a guitar can do when you’re in distress.

How did you get started with Guitars for Vets? 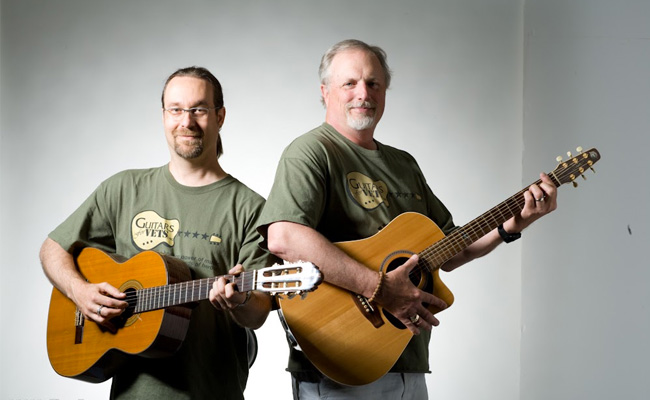 In 2009, I was retired and playing in a band. I was doing maybe 30 or so shows a year for fun, not to make a living. There was a guitar show called the Amigos Guitar Show in St. Charles [Illinois], and that’s where I met [Guitars for Vets cofounder] Patrick Nettesheim.

Patrick is a phenomenal spokesperson for the organization, and I don’t want to play down his ability to pitch the organization but, like I said, it wasn’t a hard sell. I would have started a chapter the day I met Patrick if I could have.

In reality, it ended up taking a few months to get the first Chicago chapter up and running. I met Patrick in May of 2009, and I had my first students in July of 2010.

Initially, we were teaching in a closet in the Heinz VA Hospital. Three months later, we graduated to the beautiful new rec room the VA had built. More and more people started getting interested in the program.

Now, I teach individual classes each week and group lessons once per month. Our chapter graduates around 30 veterans per year.

Had you taught guitar lessons prior to your first lesson in 2010? What does it take to be an instructor in the program?

I did minimal teaching before Guitars for Vets. Mainly just free lessons for friends here and there, but nothing on a regular basis.

To be an instructor for Guitars for Vets, it definitely takes a different type of person. Our motto here is “PAGE”: patience, acceptance, gratitude, and empathy, with an emphasis on patience and empathy.

We’re less concerned about your abilities as a player and more concerned with your ability to reach students on their level and give them a positive experience. 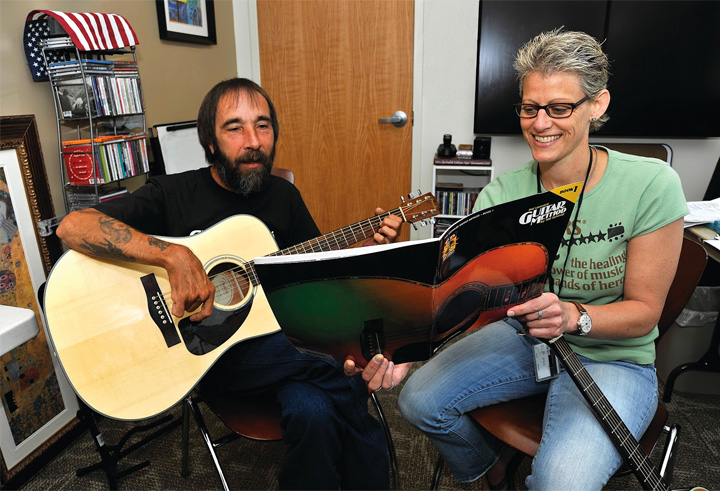 For me, teaching has been a very “learn as you go” experience, especially given the diversity of the students. I’m far from the most patient person in the world, but teaching veterans who are experiencing various stages of stress has made me a lot more patient.

Honestly, teaching has been as beneficial for me as it has been for the students. It can also be taxing. In fact, we only let our instructors teach two students per week so that they don’t get burnt out. Teaching students in the program can sometimes be as difficult as it is rewarding.

In your eyes, what’s the end goal for the 10–week, one–on–one lessons?

You know, you can’t make someone a guitar virtuoso after just 10 lessons, but that’s not the point. We’re not going to test them at the end of the course. The classes are meant to be enjoyable and teach the vets a skill. It’s a means to another end: happiness, fulfillment, and confidence.

We had one student who was in a wheelchair and could only play a special guitar with nylon strings. By the end of his lessons, all he could play was two chords, but he played those two chords with the biggest smile on his face.

In addition to one–on–one lessons, many Guitars for Vets chapters also host group lessons. Why is that important? 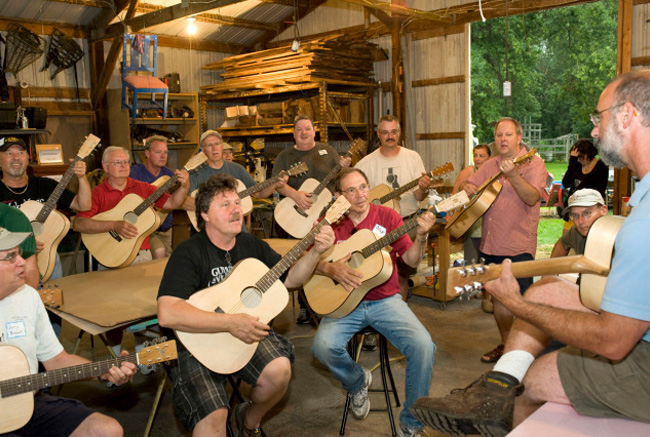 There are two main reasons we hold group lessons. First, it’s an opportunity for graduates of the program to come together as a group and continue to advance their skills. It gives them an opportunity to continue learning and to mingle with other veterans from the program. Socialization is a huge benefit of the Guitars for Vets program.

Additionally, group lessons give newer chapters the opportunity to accommodate veterans in their area before they’re established enough to hold individual lessons. There are so many veterans out there that we can’t serve, and our goal is always to reach as many as we can.

For chapters that are just getting up and running, group lessons give them a chance to make an impact quickly and more broadly.

While our “Tuners for Good” promotion has ended, you can still support Guitars for Vets by shopping the Guitars for Vets Reverb Shop or making a donation. You can also donate instruments and learn more about getting involved by calling 1–855–G4V–HERO.