From fashion to language, Hip-Hop culture has left its imprint on far more than just music. What was once shrugged off as a fad is now the globe’s dominant cultural force, with more and more reports being published to offer up statistical proof. In 2015, Hip-Hop was crowned as the most-listened to genre in the world, the same year Rap-inspired biopic Straight Outta Compton set records for cinema of all kinds. Despite all of the proliferation, Rock music has held onto first place as the most listened-to genre in the United States, as far as overall consumption. However, the genre must now watch the throne, because Hip-Hop and R&B are ushering in a changing of the guards.

Nielsen Music, an information sales tracking system considered to be the standard for the music industry, released its annual mid-year report recently. Located therein is data not all that surprising, including the fact that streaming is by far Americans’ favored choice for music consumption thus far in 2017. As reported by Forbes, what makes this particular report a game-changer is that, “for the first time since Nielsen started measuring music consumption in the United States, Rock is no longer the top genre.” As Forbes explains, “R&B and Hip-Hop has taken the crown, and while the two styles are fairly close to one another when it comes to percentages, the latter has pulled ahead, and it seems like it will continue to distance itself from the competition in the coming months and years.”

R&B and Hip-Hop, according to the Nielsen study (excerpts of which can be seen below), comprise 25.1% of all music consumption in the U.S. Rock remains relatively strong, lagging two points behind at 23% overall. The reason for the turning of the tides, writes the Forbes report, is streaming. “Rock is far and away the winner when it comes to album sales—the genre claims 40% of all album sales in the country—but the total number of records actually purchased dwindles every year, so while that percentage may remain steady or even climb, it’s not representative of how Americans are truly consuming music.” Over 29% of all music consumption via streaming, however, is the claim of R&B and Hip-Hop. “In fact, R&B/Hip-Hop is almost as popular on streaming services like Spotify and Apple Music than the next two genres (rock and pop) combined,” Forbes explains. Furthermore, seven of the top ten most popular songs on streaming platforms this year “fit squarely into the Hip-Hop field.” 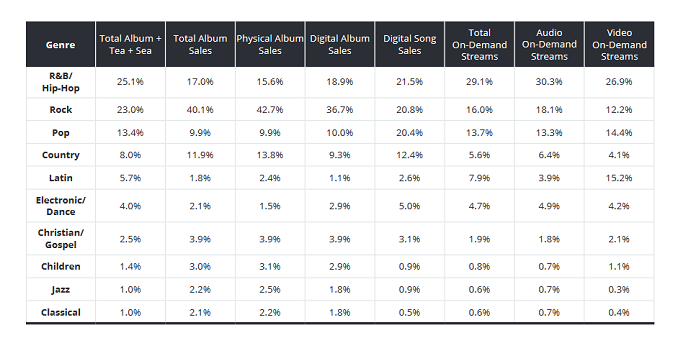 According to its official website, Nielsen reaches its findings through a combination of “monitoring radio airplays, online streaming and music consumer behavior.”