PHOTOS BY VICKI JOHNSON
Dave Rumschlag uses chairs around the fire pit at his house near Greenwich to pose six of the eight cigar-box guitars he’s made.

Dave Rumschlag’s love for woodworking and finding useful old items at auctions came together a few years ago when he started making cigar box guitars.

“They’re from the Depression, when some of the poor folk couldn’t afford to buy them, so they would make them,” he said.

Because wooden cigar boxes had sound quality, they often were used as the main part of the guitar, called the resonator.

“They took whatever they had laying around and made guitars,” he said. “That’s how it all got started.”

Rumschlag said he became interested in cigar-box guitars after they caught his attention on an internet site. 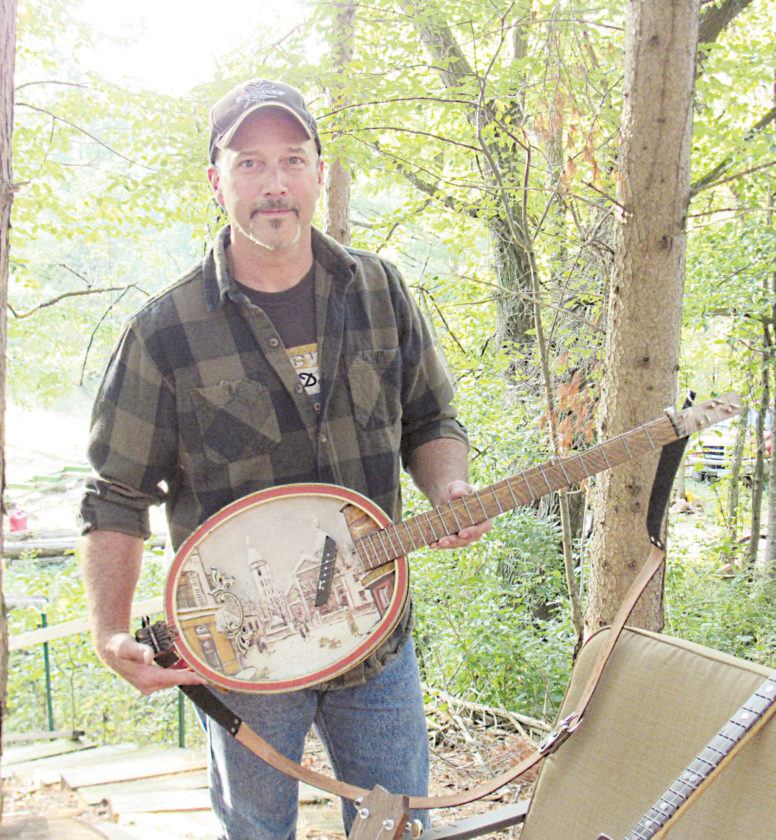 At left, Rumschlag holds a cigar-box guitar he made from a cookie tin.

“I ran across it by accident and thought it was really cool,” he said. “I like to mess with wood anyway, so I thought I would give it a try. And it’s fun.”

So far, he’s made eight guitars – mainly from items he already owned or items purchased at auctions. One uses a cookie tin as a resonator, and another uses an old license plate.

“I made one out of an old whiskey box,” he said. “I’ve given some away and I’ve kept some for myself. It’s getting to the point where I’m going to have to start selling them or build a bigger building.”

Rumschlag didn’t play stringed instruments before he started making them, but now he’s learning to play his creations.

The sound is like a blues guitar, he said. 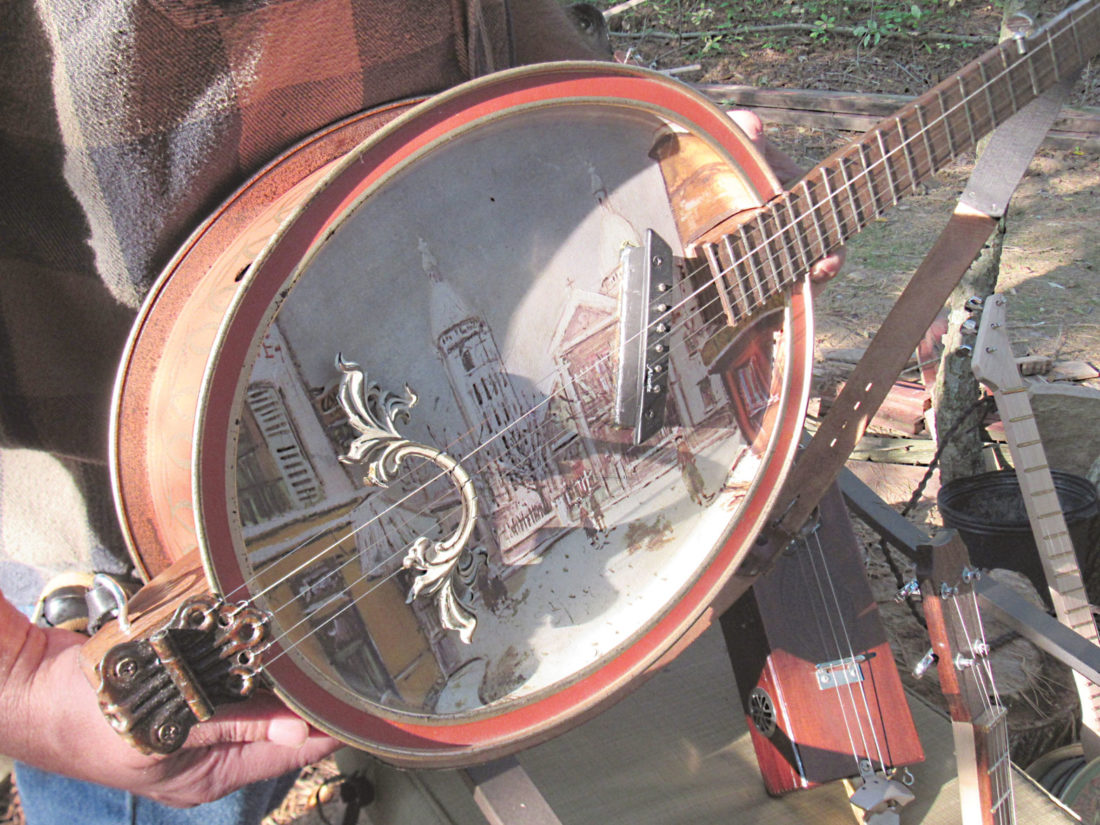 “A lot of the old blues artists were familiar with cigar-box guitars,” he said. “They play so good and they sound really neat.”

According to the website cigarboxguitars.com, there are no rules involved with making cigar box guitars. Each is an individual creation based on the creativity of the artist making them.

“Simply put, it’s a stringed instrument that uses an empty cigar box as its resonator,” the website says. “They are not necessarily of the same design as a normal six-string acoustic guitar. For example, some cigar-box guitars have only one or two strings. Many do not have frets up the neck, but are played fretless or with a slide.”

Rumschlag uses his creativity in more ways than making guitars.

The 1987 graduate of New Riegel High School lived between New Riegel and Tiffin for many years near his parents, Bernie and Joan Rumschlag. Three years ago, he bought 4 1/2 acres of wooded property east of Greenwich off US 224. 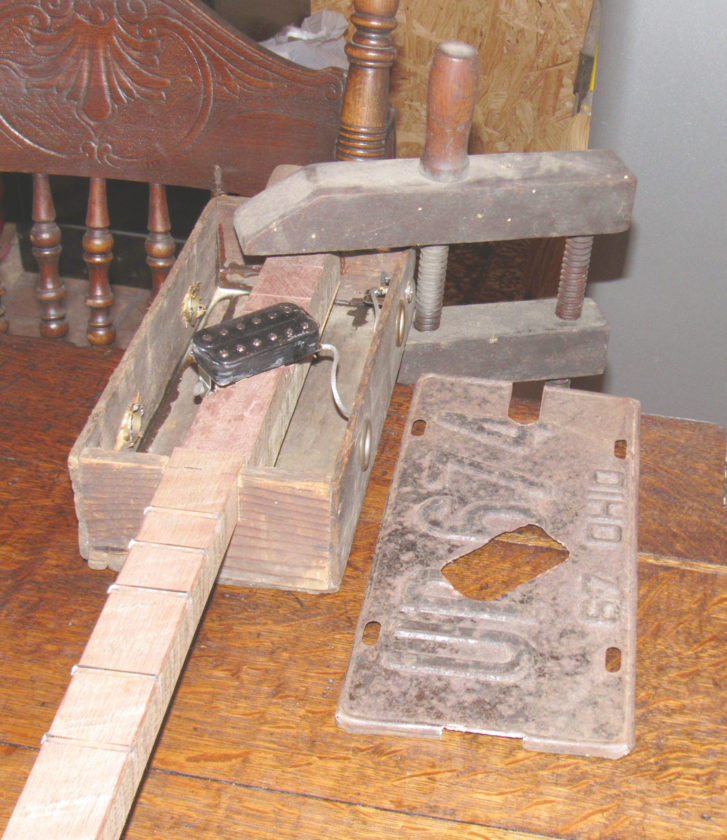 He uses an old clamp to work on his latest project, a guitar made from a wooden box and old license plate.

His daughter, Samantha, lives in the Tiffin area with 1-year-old granddaughter, Stella. Sons Nicholas and Clint live in the Greenwich area.

When he isn’t making something from wood or working on his property, Rumschlag works as a carpenter in nuclear power plants across the country.

He and teams of other carpenters build scaffolding from metal that allows maintenance teams to have access to all areas of nuclear plants so teams of people can conduct routine maintenance.

His line of work leaves ample time for working on other projects. 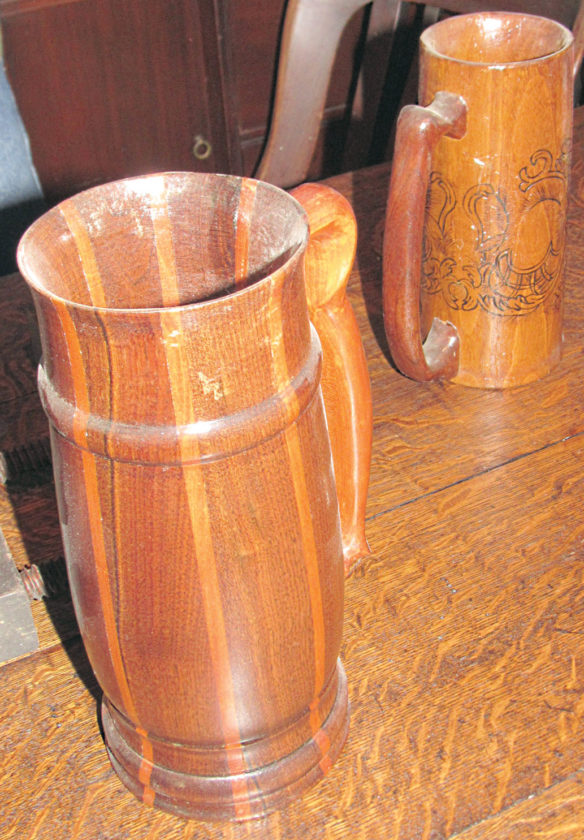 Last spring, he turned his attention to his own house.

“I’m going to build the whole thing,” he said. “I’m cutting all the timbers myself.”

Trees are being cut from his property as well as from his parents’ property.

“We have a lot of ash trees that have died‚Äù from emerald ash borer infestation, he said. “I’m going to mill my own floor boards out of ash.”

So far, he said, he’s cut 50 ash trees. Some of them are to be milled into floor boards on his portable sawmill. 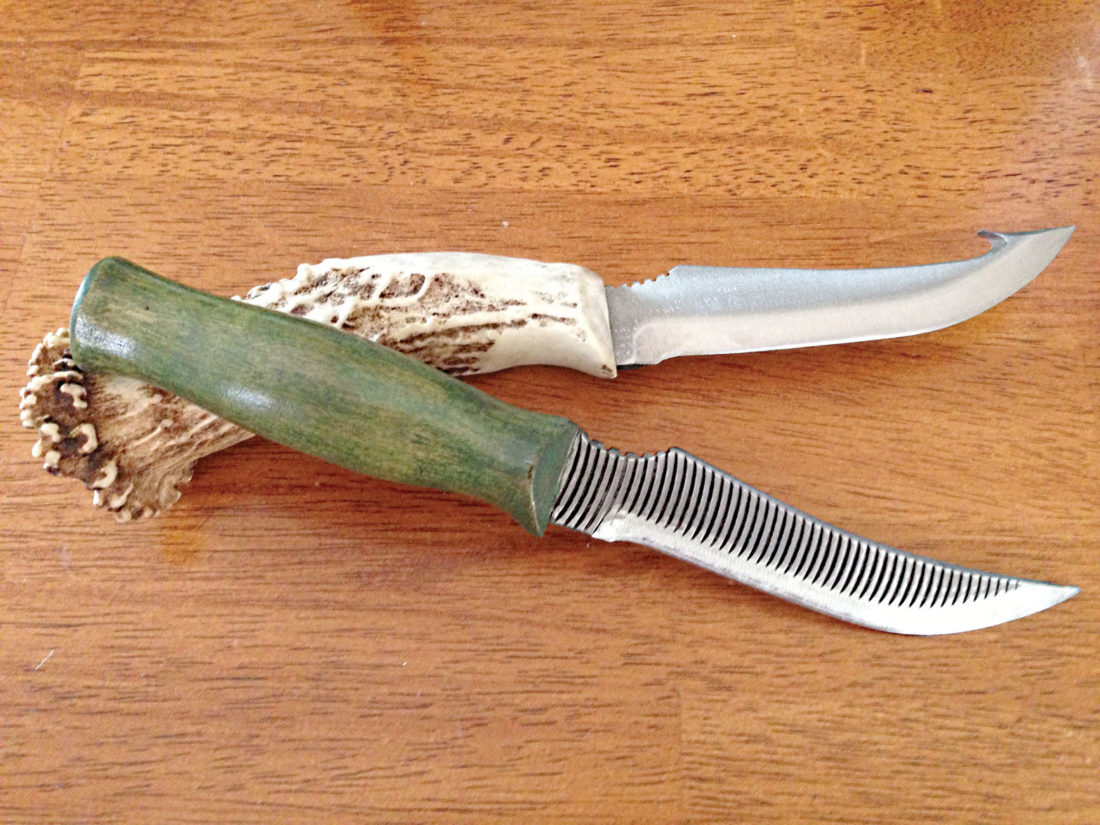 Right now he’s in the middle stages of laying block for the basement, and eventually the house will be a straw bale house with timber-frame construction.

Rumschlag said he likes the look of timber-frame homes.

“And timber frame is really strong,” he said. “If you’re going to build a house, you might as well build it strong.”

He got the straw bale insulation idea online, and he said he likes the R-40 insulation values from a natural material.

“It just appealed to me,” he said. “I thought it would be really cool to do something like this.”

He plans to finish the inside of the walls with a natural clay.

Although the outside of many straw bale houses are stucco, he said he’s finishing the outside with handmade wood siding.

He estimates the house will be complete in a year.

“The framing itself won’t take long,” he said. “And the straw bales are pretty much just stacking bales.”

He expects the 1,700-square-foot house will use about 600 bales of straw, and he plans to include a window where visitors can look to see the bales inside the walls.

The house is to have a central great room with wings on each side for a master bedroom and a kitchen.

On the inside, of course, he’ll work his art on the cabinets in his own kitchen.

The house is the latest addition to the property.

Three years ago, he cleared an area and put in a stone driveway.

Since then, he constructed a building that houses his projects, dug a pond and built wooden steps to traverse the hilly terrain.

He calls the building his tool shed.

“It was supposed to be a tool shed, and I kind of got carried away,” he said.

He’s living in a camper during the construction phase.

He built a wooden boat last year for use on the pond.

Also on his list of woodworking accomplishments is making furniture.

The tool shed houses several pieces of furniture he has made or rescued at auction and refurbished.

For example, when he saw a table top at an auction, he saw the beauty while others saw an old piece of wood.

“It didn’t have any legs, so I added legs and put a drawer in it,” he said. “I enjoy buying old, messed-up stuff nobody else wants anymore, and then I refinish it and turn it back into something again.”