When Van Halen I hit the streets in 1978, no rock guitarist on Earth sounded like Eddie Van Halen. His style and sound seemed otherworldly and outrageous compared to the other players of the period, but his style is really the result of a few distinct influences mixed with Eddie’s own originality and creative power.

Born in Holland in 1957, Eddie’s father was a professional musician who played saxophone and clarinet and got him and brother Alex into music very early on. At first, both boys went down the classical path. “We both started playing piano at age six or seven,” Eddie recalls, “and we played for a long time. That’s where I learned most of my theory. We had an old Russian teacher who was a very fine concert pianist; in fact, our parents wanted us to be concert pianists.”

The Van Halen family moved to America in 1967 and it didn’t take Eddie long to discover rock and roll music. “When we came to the U.S. I heard Jimi Hendrix and Cream, and I said, ‘Forget the piano, I don’t want to sit down-I want to stand up and be crazy,’” he told Guitar Player Magazine in his first interview. He first started playing drums but soon made the switch to guitar and gave the drums to Alex.

His first big influence on guitar was Eric Clapton. He became obsessed with Slowhand and learned to play pretty much everything Clapton had recorded up to that point. Jimi Hendrix was also in his ear during these early years and it is these two players who imbued Van Halen’s playing with a strong blues influence, great finger vibrato, and his often-overlooked rhythm guitar skills, which do more to propel Van Halen tracks than many people realize. They are also the reason Eddie loves playing shuffles and includes one on every record. 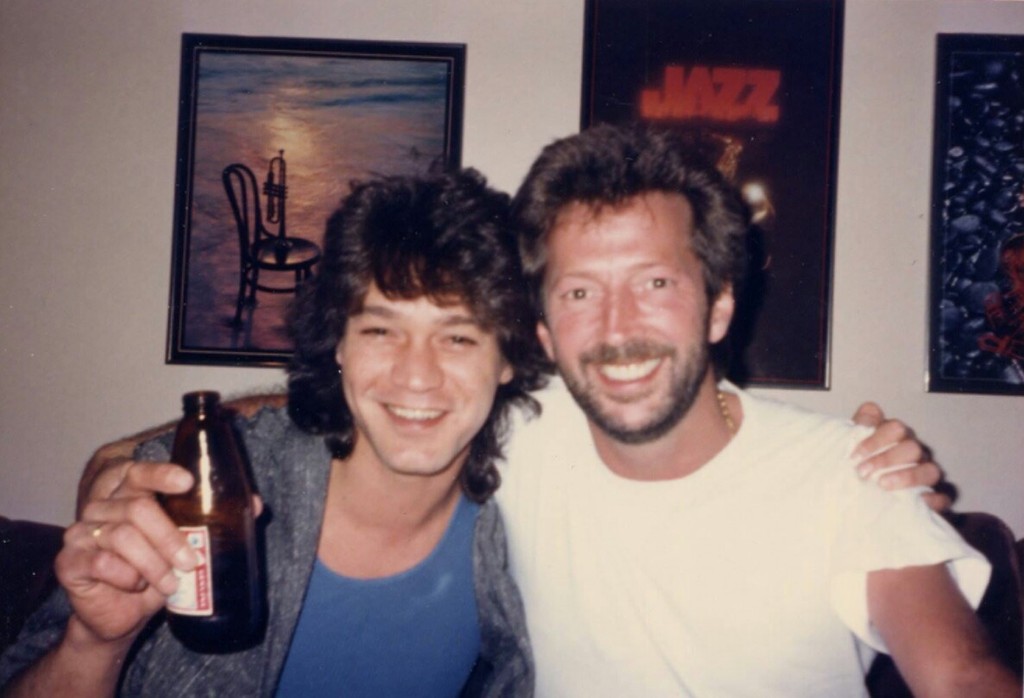 Another huge influence on Van Halen’s playing was British prog/fusion guitarist Allan Holdsworth. Holdsworth was known for extremely wide intervals in his playing due to his beyond-normal fretting hand reach. This sound drives a lot of the non-blues in Eddie’s lead playing, and he has said “Holdsworth is so damned good that I can’t cop anything. I can’t understand what he’s doing. I’ve got to do this [does two-hand tapping], whereas he’ll do it with one hand.” Eddie’s core style is really just a combination of classical training, blues/rock feel, and jazz/fusion melodicism. Other factors that had influences on him were the power trio format, which gave him the space he needed to develop his often in-the-moment vibe and his home-built high-performance guitars that were no-frills one-pickup affairs with big frets, wild paint jobs, and Floyd Rose Locking Vibrato systems, although he used modded Fender trems early on. These guitars came to be called Super Strats and dominated the guitar market for most of the 80s after being copied by just about every guitar maker on Earth.

Eddie’s main influence, though, could be said to be himself, to be his own original way of putting these sounds he liked together in a way no one ever had before. All of it, even the two-hand tapping, had been done before but not in this sort of hot rodded California way and not all at the same time by the same player. He created a new way to play and to think about the electric guitar just as much as Jimi Hendrix had done in just about the same way. Both players mixed relatively common influences with heaping helpings of originality and vision that burst fully-formed into the world on their debut records. In both cases, nothing was ever the same again.