School of Rock star Alex Brightman performed in studio for USA TODAY this past August. Brightman was nominated for a Tony Award as best actor in a musical on Broadway.
Michael Monday

“School of Rock,” based on the popular Jack Black movie, is at the Auditorium Theatre Saturday, Sept. 30 through Saturday, Oct. 7. (The original London cast is pictured.)(Photo: ©Tristram Kenton)

Before being cast as the accidentally-life-changing-music-teacher in the musical School of Rock, Rob Colletti was assigned a personal trainer to ensure his body could handle the rigors of the show.

Colletti stars as Dewey in School of Rock, about an aspiring rock star who pretends to be a substitute teacher at a private school in order to pay his rent and ends up transforming his 5th grade class into a rock band.

This musical adaptation of the hit 2003 film is launching its national tour here at the Rochester Broadway Theatre League’s Auditorium Theatre, Sept. 30 to Oct. 7.

School of Rock features songs from the movie with additional music by the legendary Andrew Lloyd Webber, lyrics by Glenn Slater, and a book by Julian Fellowes, creator of Downton Abbey.

With those heady creative forces at work, this show is far from a rehash.

“The movie really was designed to be a Jack Black vehicle,” says David Ruttura, the associate director who has been involved since the first workshop. “You kind of forgot about the kids.”

Despite the intensity of Dewey’s role, Colletti insists the true stars of the show are the kids, who play their own instruments onstage. “School of Rock,” the movie, really revolved around its star, Jack Black. However, in the stage production, the kids, who play their own instruments onstage, are the stars, says associate director David Ruttura. (The original London cast is pictured.) (Photo: ©Tristram Kenton)

Ruttura says that was always the intention of this adaptation. The creative team wanted the stage production to emphasize the journey of the 5th graders.

Those actors range in age from 9 to 12. Ruttura says it’s a fun age, because kids are “at a point where they’re starting to have real opinions.”

They’re still kids, though. “One of the kids tried to get me to take him to see an R-rated movie once,” Colletti recalls. But for the most part, “they’re just actors like we are, and they show up every day with their stuff memorized and we all work the same amount.”

“A lot of times you’ll go and see Annie and there’s a very specific type of child actor,” he says. In other words, “kind of annoying.”

For this show, the goal was authenticity. “We want them to feel natural … like a kid you’ve seen in school or down the street or you know as a niece or a nephew.”

So the kids they cast don’t all consider themselves actors first.

Take Gilberto Moretti-Hamilton, a 10-year-old from New York City, who is playing Freddy, the drummer. His father gave him his first drum when he was a 2-year-old and he immediately started banging on it. He has been playing ever since and hopes to continue to be a musician when he grows up, like his parents.

Along the way, Ruttura has met kids who started to play their instrument as a result of seeing the 2003 film version of School of Rock. Likewise, he hopes that kids will see the musical and be inspired to explore interests in music.

He says he has already seen more girls picking up the bass because of the show. Compared to when the show opened on Broadway two years ago, “it’s so much easier for us to find girl bass players ’cuz they all want to be Katie,” the bass player in the musical.

Not all the child actors dream of a life on the stage. Ruttura says he tries to encourage the kids to take the show’s message of exploring your passions to heart. Some of the kids do want to be musicians, but others have different ambitions — a few future lawyers in the mix, and even an orthodontist. 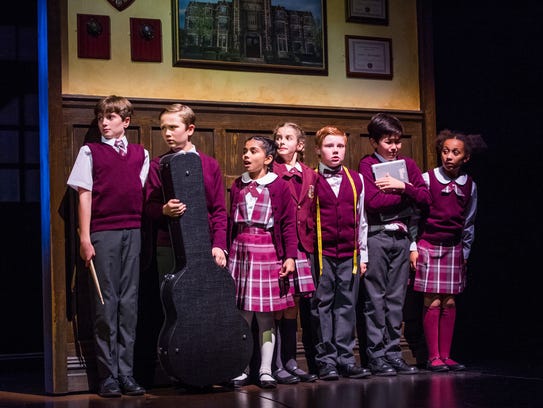 Some of the kids in the “School of Rock” touring production coming to Rochester want to be musicians, says associate director David Ruttura. But others want to be pursue careers unrelated to music or show business. (The original London cast is pictured.) (Photo: ©Tristram Kenton)

“It’s fun to see this kid that’s amazingly gifted at the piano or the guitar be like, ‘This is a great time for me but I’m really excited to go to medical school.’ … This is a moment in their lives that’s huge, it helps them to open up and express themselves.”

And that’s what audiences will walk away with. Essentially, says Ruttera, the show is about saying, “Kids have something to offer, and kids’ expression is valuable.”

What: School of Rock, the musical.