At 80, Buddy Guy is considered by many as the greatest-living blues guitarist. He’s one of the founders of Chicago blues, and has influenced everyone from Keith Richards to Eric Clapton. Guy has served as a bridge between blues originators including Muddy Waters and rock ‘n’ roll legends like the Rolling Stones and others.
Wochit 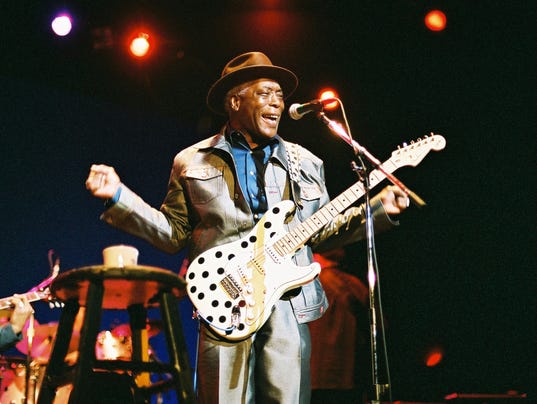 It’s been many years since blues was a regular part of radio playlists, and the days when individual deejays could play any song they wanted went away somewhere around the demise of cassette tapes.

Now corporations own multiple stations, and because program directors rely on the same airplay data to decide what songs get played, radio has become tightly formatted and homogenized. The vast majority of stations nationwide play the same limited selection of songs within their formats.

But this hasn’t stopped Buddy Guy (and his producer and sometimes-songwriting collaborator, Tom Hambridge) from keeping radio in mind whenever he makes a new album.

“When we go in the studio now, we’ll both be trying to hit a note, whether it’s singing or playing that hopefully one of these program directors says ‘Buddy Guy’s got a record out. I think we’re going to have to play one or two of these songs off of this record,’” Guy said in a recent phone interview. “Hopefully it’s good enough for them to look at it that way.

Guy will be bringing the blues, and supporting act Blackfoot Gypsies, to the Montgomery Performing Arts Centre on Thursday at 7:30 p.m. Tickets are $27-$87, and are available through Ticketmaster or the MPAC box office. Call 481-5100 for more information.

Guy released his latest album, “Born To Play Guitar,” in summer 2015 and it included a few songs that seemed compatible with rock radio formats. A leading candidate is “Wear You Out.” Featuring guest vocals and guitar from ZZ Top frontman Billy F. Gibbons, it’s a catchy rocker with plenty of the dusty blues-rock grit that has made Gibbons’ band famous and very popular.

Guy said Gibbons made time in his busy schedule to perform on the  song, saying ‘I’ll do anything to help Buddy.’ According to Guy, that’s just how things have long worked between blues artists.

Gibbons isn’t the only high-profile artists who lends their talents to “Born To Play Guitar.” Singer Joss Stone sings on a swinging, string-accented cover of the Brook Benton/Dinah Washington song “(Baby) You Got What It Takes,” and Fabulous Thunderbirds frontman Kim Wilson adds harp to the rollicking “Too Late” and “Kiss Me Quick.” Then there’s the stately gem “Flesh & Bone,” which features guest vocals from the legendary Van Morrison.

“Tom (Hambridge) had been working with him (Morrison),” Guy said, explaining how the Irish singer got involved in the song. “Those guys are good friends.”

Of course, “Born To Play Guitar” proves once again that Guy doesn’t need special guests to make some of the best blues music going. One of music’s all-time great guitarists, a powerful vocalist and charismatic performer, Guy has been a major figure on the blues scene since the 1960s, when he was signed by legendary blues label, Chess Records, home to the likes of Waters, Howlin’ Wolf and Little Walter.

During that time, Guy was recruited to play on numerous albums by the label’s leading artists, but struggled to get label co-owner Leonard Chess to embrace the high-charged, hard-edged type of blues he wanted to record.  As a result, he released only one album on Chess before leaving the label in 1967,

Later on, he enjoyed a fruitful partnership with harmonica ace Junior Wells, but went nearly two decades without a record deal before he signed with Silvertone/BMG and made an emphatic return with his Grammy-winning 1991 album, “Damn Right, I’ve Got The Blues.”

He followed that with two more Grammy-winning albums, “Feels Like Rain” (1993) and “Slippin’ In” (1994) and has been releasing energetic, well received albums on a regular basis ever since.

As Guy’s profile has grown and his popularity has gradually increased, he has earned his rightful place as one of the greats of the post-World War II blues scene. With the recent death of B.B. King, Guy, who seems far younger than his age of 81, is now easily the leading blues artist of his generation.

“Flesh & Bone,” the song recorded with Morrison, is dedicated to King, who was a long-time good friend of Guy’s. He said King’s impact on blues, guitar playing – and music in general – is pretty much immeasurable.

“I could talk to you for six months on B.B. King,” Guy said, asserting that King’s early hit, “Three O’Clock in the Morning” (also known as “Three O’Clock Blues”) forever changed the stature of the guitar within popular music.

“B.B. King sent the price of a guitar, an acoustic guitar, from $5.95 to I’m talking about hundreds,” Guy said. “I’m talking about five dollars and ninety-five cents, you could order through a catalog. And when he made ‘Three O’Clock in the Morning,’ the price of a guitar went so you almost had to buy it like you buy a car on time, if you wasn’t making any more than I was making on that farm.”

And as much as guitar icons such as Eric Clapton, and Jimi Hendrix have touted Guy as one of their key influences, Guy said he has to take a back seat to King when it comes to the impact they each made on guitar playing.

“So B.B. King, all the rock guitar players, everybody knows him, maybe not as well as I knew him, but coming up, some of those rock guys who were more famous than me and him put together, would come back and tell you ‘I got something from Buddy Guy.’ But Buddy Guy got it all from T-Bone Walker and B.B. King, the squeezing of the strings that all of us do today,” he said. “So I think he deserves credit. I think one magazine had the top 100 guitar players, and I think they had him at four, five or six, and I say that’s not right. He should be one for a long time, because I don’t care what rock guitarist you find squeezing those strings with all of those special effects, punching buttons and getting all these different tones, he was shaking his wrist and getting all of the tones before we knew what it was all about.”

King, of course, was a leading ambassador of the blues, and Guy has embraced the same role by promoting bleus artists past and present – and the genre itself – in interviews and by maintaining a busy touring schedule. Guy’s shows generally feature not only his own material, but covers of classic tracks by his blues heroes.

Guy, though, says his live show is unscripted and is built around what his audiences want to hear.

“I mention this every night before I play on the stage, I don’t bring   a set list because I don’t know if that’s what you want to hear tonight,” he said. “So I take requests from people who scream out in the audience. If I know it, I’ll play it.

“My eyes and ears are open when I go to the stage and play because that’s why I come to play, for the audience who thinks enough of me to come out and listen to me,” Guy said.