He is known for his innovation in the word of slide guitar (he published his first book on the subject in 1973 at just 21 years old), for pioneering instructional video guitar teaching with his Hot Licks series, and for collaborating and touring with all kinds of artists, from the Bee Gees to Huey Lewis and the News to Simon and Garfunkel.

A die–hard lover of the Fender Telecaster, Arlen recently put together an album that pays tribute to all of the masterful players who wielded that special model. We had a chance to talk to Arlen over the phone about his new Telemasters album and his favorite pieces from his extensive guitar collection.

To keep up with Arlen Roth, you can check out his website.

Can you talk a bit about the Telemasters project you’ve been working on?

I wanted to make an album that was dedicated to the memory of all the previous great Telecaster masters, like my good buddy Danny Gaton, Warren Bucannon, Jimmy Bryant, Albert Collins. You know, anybody that was ever really considered a master of the Telecaster, we wanted to dedicate it to them.

The album is about 16 tracks and has about 14 artists playing on it. I went down to Nashville to record since most of the guys on the album are based there. Each one just kept walking through studio doors, one more ready than the next. Johnny Highland and Steve Warner and Jack Pearson and Brent Mason — all these amazing players, boom, boom, boom, boom.

Albert Lee, Vince Gil, and Brad Paisley were added to the project a bit later, as well.

So it’s very big, very ambitious. We filmed a lot of it for a little accompanying documentary. It’s actually been a year since I first cut those tracks in Nashville, which is really hard for me to believe. But I’ve been working steadily on the album since then.

How did the concept for it come about?

It’s something that just felt natural for me. I had done the slide guitar summit, and you’ve got to remember that I’ve done a lot of collaborative albums. So that concept sort of had already been put into action by me years ago, and then I said, “You know, I did the slide summit. Now it’s time to do the Telemasters.”

I feel so honored that all these folks and peers of mine jumped at the opportunity right away to be a part of it. I mean, I had to stop it at like 13 or 14 artists because I easily could have had like 25.

What is it about the Telecaster specifically that draws you to it?

It’s a bit cliche, but what I like about the Telecaster is that they got it right the first time. There’s something about the way it was designed and the plane of how you hit the strings and the things you can do with it. Bending behind the nut, for example.

It even rests perfectly on your leg when you’re playing in the studio. Without a strap, a Strat will slide away from you. But the Telecaster won’t, it’s the perfect design.

I bought it from a guy who was driving a car through Manhattan with about 12 Telecasters in his car. I chose that one, acoustically, right on the street in front of my apartment building.

You know what they say, “If it sounds good acoustically…”

Arlen Roth with his Telecaster

I’ve actually used my Telecaster for an acoustic overdub on an album. They mic’d it acoustically, and it had so much presence that they were able to make it just like I was playing a Martin.

Wow. That’s a testament as much to the Telecaster model as it is to your particular specimen. Not all guitars of the same model are really the same, of course.

Of course not, they’re all different. That’s why I checked out a few of those guitars from that guy’s trunk. I knew I liked that one I got. They have to be right acoustically, nice and lightweight.

In fact, Fender took my ‘53 Tele from me for a NAMM show. I was a bit apprehensive, but I figured that it’s Fender. They used it as their prototype for their ‘52 reissues. Sometimes I pick up one of those guitars and think, “Ah, there’s my neck.”

Thankfully, I got mine back after four months.

Are there any of other magical instruments or holy grail instruments out there that you’ve been looking to either buy or at least play?

I don’t know. I have a collection that I’m very satisfied with, but somehow guitars always seem to find their way to me.

I’m very happy with my new Delaney Arlen Roth Signature Model, which combines a Telecaster and a Strat and a Les Paul all in one. I don’t like having to change guitars on stage, so now I only have to change for slide guitar. 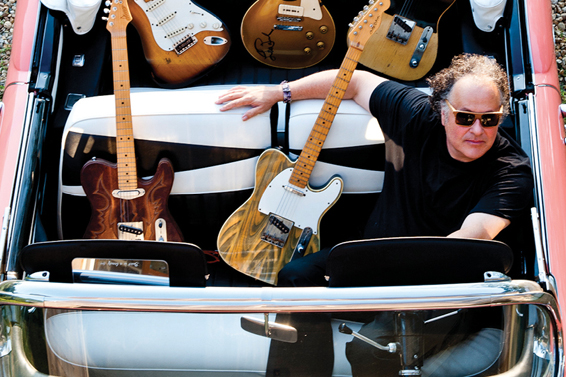 I miss some of the early Strats that I had. I still have my ‘54, but I would love to get ahold of a white Jimi Hendrix Strat, like a ‘69. I love that Hendrix tone with a big headstock, but I can make a Tele sound that way, too.

I’ve gotten into archtops a tremendous amount. I love a lot of the early G&L arch tops. I love playing my Gibson, the ES–150, the Charlie Christian guitar.

I get inspiration from different instruments. I break out a new bunch once in awhile and go through a whole different set of inspirations.

I’ve also got a couple of really nice early Gibson flattops that I’m using. I’ve got an L1 archtop with the round hole, like what Robert Johnson played.

There’s actually a Reverb seller (Wide Sky Guitars) who builds replicas of those by hand out in New Mexico. Of course, vintage models pop up from time to time, but I think it was neat that someone loved the L1 so much that they wanted to build a modern take. It looks beautiful.

I think I’ve seen the one you’re talking about. I love that there are luthiers out there doing things like this, like my close friend Mark Simon who created the terraplane guitar that I used for slide guitar. He’s building me a new model now called the Rocket 88 because I did the song Rocket 88 with Johnny Winter, and I have a long history with Rocket 88. I drive a 1950 Rocket 88.

Another holy grail instrument was built for me by this wonderful guy out in Wisconsin, Todd Cambio of Fraulini Guitars.

I think, well another one that was a holy grail to me was built for me by this wonderful guy out in Wisconsin. He has that Fraulini Guitars. It’s like an old red belly Stella 12–string. A big, fat guitar with that huge tone. I always wanted one of those, so he does that.

His guitars are tributes to the ladder–braced guitars of the ‘20s and ‘30s — really, really strongly built. They are just beautiful. It amazes me when there are these luthiers that will start specializing in something and want to pay tribute to a certain style of guitar.