How to place your microphones when recording acoustic guitars. by Doug Young

There are many types of microphones, but the most popular type for recording acoustic guitar is the cardioid condenser mic. Inexpensive models such as the Audio-Technica AT2020 or AT2021 start at under $100. If your budget allows, consider popular models like the Shure SM81 or Neumann KM 184. High-end mics can easily cost thousands of dollars. Cardioid mics are usually best for home recording, because they pick up sound primarily from the front and reject sound from the rear, reducing noise and limiting the effect of poor room acoustics. When choosing a mic, be sure it works with the rest of your gear. Condenser mics use XLR cables and require phantom power, which can be supplied by your preamp or computer interface. You can use dynamic mics, which don’t require power, but condensers are usually preferred for recording guitar, because they’re significantly more sensitive and accurate.

Stereo recording with two mics is a popular way to record acoustic guitar, but you might begin by experimenting with a single microphone. A mono recording often works well when mixed with other instruments, but even if you’re recording solo guitar, it’s useful to learn how to use one mic before moving on to stereo. A good initial location is the spot where the guitar neck joins the body, about a foot away from the guitar. One way to fine-tune the placement is to listen to headphones while you move the mic around, but headphones can be misleading. You’ll probably get a more realistic idea of the sound by recording a short example, and listening back through your speakers.

You can make substantial changes to the way your guitar sounds on the recording simply by moving the mic small distances. You can also try entirely different mic locations—other good starting spots are behind or below the bridge and centered in front of the guitar, but raised above the soundhole. (Directly in front of the soundhole almost never works.)

The distance between the mic and the guitar also has an effect on the sound. In an ideal acoustic environment, you might get a great sound with the mics as much as three feet away. But in home recording, you often have to place the mics much closer to eliminate undesirable effects of the room. Cardioid mics have a characteristic known as “proximity effect” that creates a deeper, bassier sound as you move the mic closer to a sound source. The effect generally begins at about 16 inches. As you move closer, the sound will be more direct and have more bass. Experiment to see what distance works best in your room and with your guitar. You can also experiment with the angle of the mic. For example, turning a mic in toward the soundhole should produce more bass, while turning it away will produce less.

If the guitar is to be featured prominently in your final mix, you may want to record in stereo, using two mics. One common setup, known as X/Y, uses two mics placed so that the capsules are as close together as possible, and angled at 90 degrees. For X/Y miking you can try the same locations we discussed for mono. There are mic holders designed specifically for X/Y that allow you to place both mics on one stand, which allows for easier positioning.

You can achieve a more spacious sound with a technique known as “spaced pairs.” There are many variations to this approach, but a common starting point is to place one mic where the neck joins the body and a second mic near the lower bout behind the bridge (see photo). There are many other common mic patterns, but few hard-and-fast rules, so don’t be afraid to experiment. 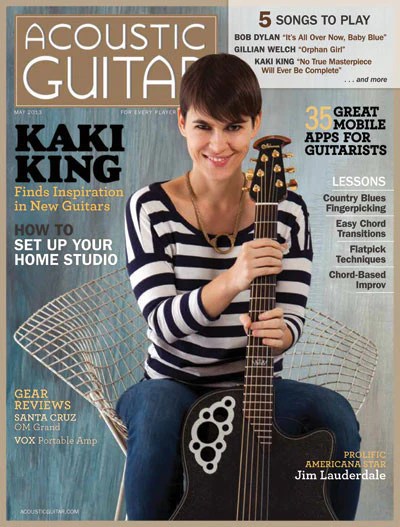