From the September 2017 issue of Acoustic Guitar | BY MELINDA NEWMAN

Spend any time in Cuba and several times a day you will likely hear street musicians strumming an acoustic guitar to “Guantanamera,” which is to be expected, and “Hotel California,” which is not.

I arrive in Cuba as a walking music store, bringing with me more than 200 sets of acoustic and electric strings for guitar, bass, violin, mandolin, and banjo. They had been donated by professional musicians, string manufacturers, and an LA-based guitar shop (Truetone Music) with a near-fervent zeal to help out their musical brethren in need.

Folk singer-songwriter and guitarist David Baerwald personally gathered dozens of string donations from professional guitarist friends—who have played with the likes of Paul McCartney, Sting, and Beck—and even threw in a mandolin and an electric bass, the latter packaged with bulky fishing tackle and rods we were delivering to Baracoa, a remote village devastated by Hurricane Matthew in October.

It’s not only that strings (much less guitars) are hard to find in Cuba—even in the major, relatively modern city of Havana—it’s that the cost is far out of financial reach for the average Cuban, for whom privation is a way of life (the average state salary is the equivalent of  $18/month). That makes the omnipresence of music, by amateurs and professionals, all the more remarkable. Thanks to the lifting of strict travel restrictions between the USA and Cuba in 2014, American tourists like me are flocking in droves to experience what was glimpsed in films such as the music documentary Buena Vista Social Club. In 2016, a record 4 million people visited Cuba.

The acoustic guitar is believed to be the first instrument heard in Cuba, following conch shells. It is as essential to the Cuban zeitgeist as cigars and rum, serving as the accompaniment to 500 years’ worth of often turbulent history and a wide array of influences including African, Haitian, Spanish, and French.

An enviable sense of rhythm seems to flow through Cubans, capturing an irrepressible spirit and joy. In any public place where there is music (and there is almost always music), there is salsa dancing, which children apparently come out of the womb knowing how to do.

Though isolated through location and government-controlled media since the late communist leader Fidel Castro overthrew the capitalist government in 1959, the island state of 11 million has always figured out a way to keep the music flowing. (One of the more popular digital-age means is what is known as “The Package,” a one-gigabyte memory stick filled with American media, including downloaded music and movies, brought to Cubans from abroad. That could explain the ubiquity of “Hotel California.”)

Our first stop is Santiago de Cuba, on the southeastern end of the island, roughly 700 miles from Havana. Santiago, where, curiously enough, Graham Greene wrote Our Man In Havana, is home to trova—a musical style influenced by the French community which came to Santiago from Haiti.

The contemporary trova—called nueva trova and defined as trova music played after 1959—owes a debt to the US folk music of Pete Seeger, Bob Dylan, and Joan Baez. Groups of trova players roamed post-revolution Cuba. Rock ’n’ roll wasn’t officially sanctioned, but they listened to music smuggled in or passed from musician to musician. The undercover nature of the era earned it the tag “generation of the mole,” said Cuban singer-songwriter and music historian Frank Delgado.

Santiago is also famous for son, a style that dates back possibly as far as the 16th century and became the basis for almost any kind of Cuban music after it spread to Havana 100 years or so ago. Son, like most music in Cuba, is a hybrid—a blend of Spanish folk guitar melodies and African rhythms.

During our first dinner in Santiago, a trio—composed of a vocalist, acoustic guitarist, and bongo player—runs through Cuba’s greatest hits and Spanish-language classics ranging from the extremely popular “Chan Chan” to “Besame Mucho,” all in son style. The music sways as gently as the palm trees behind us, grounded in the guitar and the hypnotic drum beat.

Two days later, we take a 10-minute boat ride to Cayo Granma, an island of 1,600, famous for being the playground of the rich before the revolution—the Bacardi (rum) family’s pink mansion still stands here. Before and since the revolution, it has primarily been a fishing village, with swordfish and red snapper all within relatively easy reach of its shores.

As we sit down for a lunch of local catch, a trio serenades us. Two of the players—the acoustic guitarist and the bongo player—are two-thirds of the trio we saw the first night. Other than “Hotel California,” every song’s intro sounds like “House of the Rising Sun,” until they actually play that Animals hit.

When I hand the acoustic guitarist, Paco, a few packages of strings, I get an unexpected, but not (I soon discover) uncommon reaction. He tears up, clutches the strings to his heart, and says “mi corazón,” before hugging me and adding that he can’t get strings in Cuba. Paco and his guitar seem melded together. Holding it high, he often conspiratorially rests his cheek on it, as if they’re sharing secrets. His guitar has no strap pins, so he hooks his strap into the top and bottom of the sound hole. Like many guitarists in Cuba, Paco is self-taught, learning to play from watching musicians on TV.

Twenty miles outside Santiago, we stop at El Cobre, home of Cuba’s shrine to the revered la Virgen de la Caridad. El Cobre is also home to the El Cobre Cultural Center, an after-school program that teaches painting, dancing, singing, and music. For a country that is lacking in so many basics (try getting on the internet anywhere other than Havana), Cuba puts a premium on arts education and literacy, boasting a 99% literacy rate. Most guitarists receive European-based classical training at university, often learning the more traditional Cuban styles on their own.

At the El Cobre Cultural Center, we are treated to a performance by a steel drum band that reflects the Caribbean influence on the eastern side of the island, and, of course, ends with an encore of “Hotel California.” We donate enough strings and art supplies to fund several months’ worth of programs.

A  few days later, outside of Baracoa, during a performance of indigenous dance, we come across our first tres, a small guitar with three pairs of unison strings that sounds like a cross between a mandolin and a regular guitar when plucked. The five-piece band has been together for more than 35 years, playing traditional music from Eastern Cuba, including changui, a rhythmic, mystical style from Guantanamo.

In the colorful Spanish colonial city of Trinidad, we meet Jesus Bello, one of Cuba’s premier singers and guitarists. He became a star while in the traditional Cuban band Sierra Maestra and now has added “educator” to his resume. On a rooftop under a full moon, he and some of his students run through traditional Cuban songs. His son plays acoustic guitar; Bello plays a Russian bass made in the 1970s. “It’s impossible to get instruments here,” he says, so Bello tends to make his own, including an upright electric bass. David Baerwald’s bass and mandolin find a good home with Bello and his son.

Our last stop is Havana. Strolling through the streets of central Havana as the ubiquitous 1950s American cars cruise by, it seems as though every picturesque block is lined with musicians. A trumpeter clad in a smart, white suit stands out against a blue-and-green–tiled wall, channeling Dizzy Gillespie—a hero to many Cubans for his trailblazing work with Cuban percussionist Chano Pozo in the 1940s, which heralded the birth of Afro-Cuban jazz. 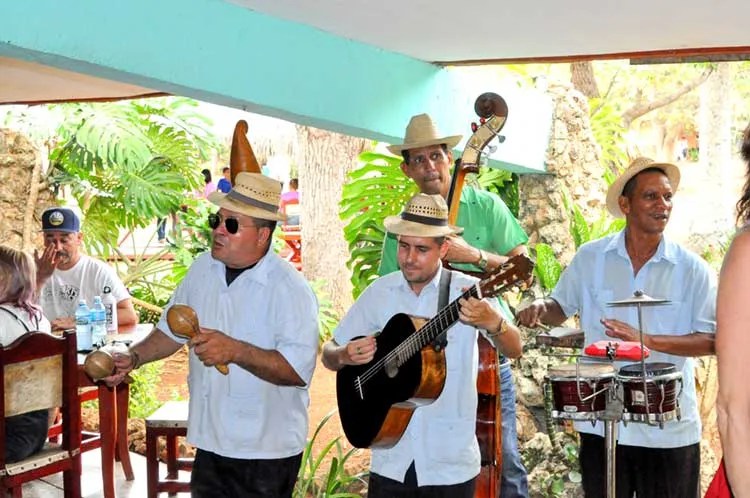 On a perpendicular street, a trio of musicians—two old-timers on guitar and their acolyte on a small Afro-Cuban drum—serenade passers-by. I stop to give them my last set of strings. The gregarious leader grabs my hand and kisses it repeatedly. Upon hearing I’m from the USA, he declares they will play a mini-concert of American music just for me. A buoyant “Oh! Susanna” is followed by a doleful “My Way,” and, yes, “Hotel California.”

That outfit recorded much of their material at Egrem Studios, our next stop, situated on a narrow, rundown side street in old Havana. The studio opened in the 1940s as the home for the Cuban Symphony Orchestra, but was taken over by the state in 1959 after the revolution. The Rolling Stones were scheduled to stop by Egrem Studios during their historic free Havana concert, which drew more than 500,000 people in March 2016, but time didn’t permit. They left their mark behind though, donating much of their equipment to Cuban schools.

The studio was built to capture Cuban music live, so behind the wood-paneled walls of the main studio are sheets of fiberglass that make acoustic instruments sound more vibrant. Three small windowless isolation rooms in the back record percussion, while vocals are cut live on the main floor. After Buena Vista Social Club’s success, musicians flocked to Egrem. “This studio is like our Abbey Road,” says engineer Raul Arroyo. 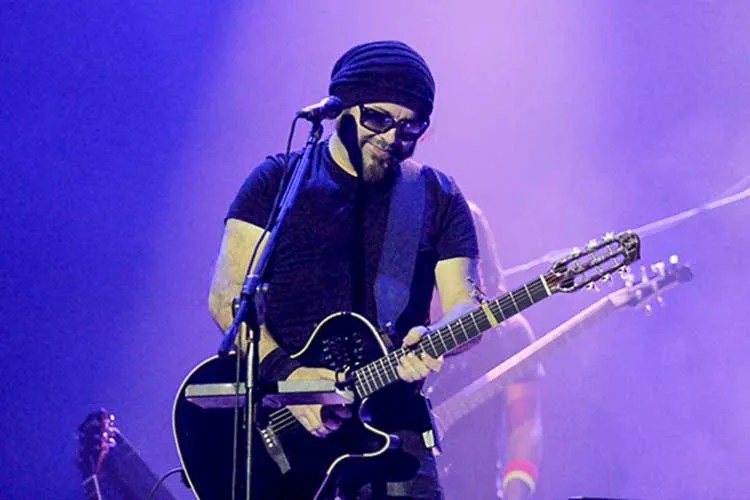 On our next-to-last night, we go to a family-run restaurant (called a paladar, which serves as an alternative to state-run restaurants) for an intimate concert by Carlos Varela, who is known as the Bob Dylan of Cuba, or as Jackson Browne referred to him in the 2015 documentary of the same name, The Poet of Havana. The nueva trova singer-songwriter, who has also played with Bonnie Raitt and Dave Matthews, tackles challenging topics in his folk-based rock songs, including political oppression, immigration, and, of course, romance. He was the first troubadour to come to the USA after Obama took office, playing to adoring crowds in Miami. He and Browne became fast friends after Browne visited Cuba. Browne recorded “Walls and Doors,” a song Varela penned about freedom, on his 2014 album Standing in the Breach. The song sounds straight out of Browne’s playbook: melodic and mid-tempo, while building with a gentle urgency.

Varela plays a hollow-body electric guitar with a Spanish guitar headstock that he picked up during his travels. “It’s very difficult to find an instrument in Cuba,” says Varela’s guitarist Roberto Gomez. “We have to find them in US or Canada or they are passed down after someone dies.” He adds his dream guitar would be a Fender Stratocaster.

As Varela’s music flows through the gate of the restaurant, people gather in the street to listen and try to catch a glimpse of him over the wall. In many ways their plight resembles that of the musicians in Cuba—they are deterred by difficulties, but remain undaunted and resolute. 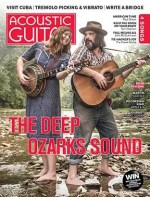