Three years ago, Brian Vodinh thought he had made his final album with 10 Years, the group he founded in 1998 and had led through seven studio albums and such singles as the chart-topping modern rock hit “Wasteland,” and the top-10 rock songs “Beautiful” and “Shoot It Out.”

In fact, after finishing the 2015 album, tellingly titled “From Birth to Burial,” Vodinh, who wrote the music (with singer Jesse Hasek handling lyrics), produced and played guitar, drums and other instruments on the recent 10 Years albums, left the group and decided to focus on his growing family.

Singer Jesse Hasek, meanwhile, pushed forward, touring with a lineup that included long-time guitarist Ryan “Tater” Johnson and recent recruits on drums, bass and guitar. Vodinh, now out of the band, was unsure what he’d do next as a musician.

“I always told myself and my wife — at that time I only had one child and now I have three children — but I always told myself I can’t justify being away from my family and my loved ones if I’m not out here enjoying it and working as hard as I can and believing in what I was doing,” Vodinh explained in a recent phone interview. “And at that time, just because I didn’t think we were playing well, and the relationships among the band members was just so toxic, it wasn’t right for me to be out there and I couldn’t justify it any longer. So when I came home, I didn’t really know what the future was going to hold for me musically.” 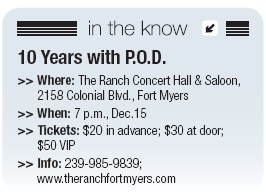 It turned out to be a good time for Vodinh to take a break from music.

“My wife and I, we were pregnant with our third child, and my wife went into labor at 20 weeks and it was extremely early,” Vodinh said. “Long story short, our youngest child, our little girl, was born at 27 weeks and stayed in the hospital, I mean, off and on, for the first year of her life … So music wasn’t even on my radar, especially being on the road. So I basically sat in a hospital for about a year, and my little girl ended up, now she is almost 4, and she is literally like a total badass. She’s totally healthy now and everything is all good.”

The same couldn’t be said of the latest incarnation of 10 Years. Touring did not help the latest lineup mesh. And right around the time when Vodinh’s youngest daughter was getting healthy, Hasek reached out to Vodinh proposing a new start for 10 Years.

Vodinh wanted to return to the band he started, but only if major changes were made. Hasek was on the same page, and in short order, guitarist Johnson and bassist Ryan Collier were dismissed. A new drummer, Kyle Mayer, was brought on board, while touring guitarist Chad Huff shifted to bass. Most importantly, guitarist Matt Wantland, an original member who had recently reconnected with Hasek and done an acoustic tour with 10 Years, was brought back after a seven-year absence.

Before long, Vodinh had rejoined and the new 10 Years was ready to make new music, writing for the first time in years as a band and then working with a producer in Nick Raskulinecz who could bring an outside perspective and help the band stay on track musically with what became the current album “(how to live) AS GHOSTS.” It turned out Raskulinecz also brought a new vision for how a 10 Years album should sound, pulling back on the vocal and instrumental layering that had been a signature for the band.

As a result, “(how to live) AS GHOSTS” sounds notably leaner than some earlier 10 Years albums. It rocks hard, with songs like “Novacaine” (the first single), “Burnout” and “Blood Red Sky” that get straight to the point, are more direct lyrically and boast some of the biggest guitar and vocal hooks the band has ever built into its songs.

Vodinh feels (“how to live) As Ghosts” is exactly the album 10 Years needed to make to reintroduce the new band to fans old and new.

“We needed to show people that hey, regardless of the sound of the record, we’re a rock band and we still know how to kick ass and we still will,” he said. “So it was really important for us to make this album be leaner in production and the songs to just be straight-forward rock songs that we thought we were killer.”

He also likes how 10 Years sounds live now. With Vodinh (who played drums on the new album) switching to guitar, and another lineup shift (Luke Narey has replaced Mayer and Chad Grennor has taken over for Huff) the band is hitting the mark on songs new and old.

“The way that I had written a lot of the catalog historically was, I don’t feel like it was executed quite right in the past,” Vodinh said. “But now with the players that we have, the execution is at the highest level that we’ve had. I’m thrilled about that, and we can feel it. While we’re on stage, you can feel how tight and how much solidarity there is there because we’re playing as a unit as opposed to five guys on stage doing their own thing. It seems like one unit now.” ¦